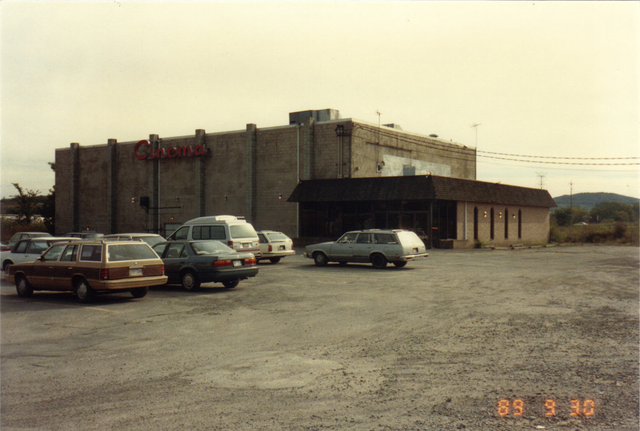 Located in the Quickway Plaza Shopping Center. The Quickway Cinema was opened on July 25, 1970 with Jack Lemmon in “The April Fools”.

The Quickway was located in the Quickway Shopping Center along Route 17 in Chester. You can see the theatre building from the highway. It was twinned in the late 70’s, and then quadded in the 80’s. The owners of the nearby Chester Cinema 6 were the last operators. It closed about 2 years ago and was gutted and converted into a two-story office building.

In 1976 it was called Quickway Cinema
View link

Looks like it had no paved Parking.Cold looking picture,but glad it is on,No comments since 2005,Wow.

Chester is a puzzle. For one thing, there are two towns in New York called Chester, the other being in Warren County, and Orange County, where this Chester is located, also has a village called Chester.

The bigger puzzle is that the November 24, 1951, issue of Boxoffice has a photo purporting to be of the Paramount Theatre in Chester, New York, designed by Michael DeAngelis, but Wikipedia tells me that in 1950 Chester’s population was only 2,878, and the Chester in Warren County was even smaller, so neither was likely to have a theater as spacious as the one in the photo.

John Lewis’s 1994 photo of the Quickway Cinema at CinemaTour shows a fairly large and rather plain building, but one that might have been built around 1950. Could it possibly have been the Paramount, as improbable as that seems? I suppose it’s more likely that Boxoffice just put the theater in the wrong town.

As joemasher said back in 2005, the theater’s building has been converted into a two-floor office building, but with some stores on the ground floor. The section that had the theater entrance in John Lewis’s photo looks like it is still there, but extended and filled with shops. The address of the Quickway Shopping Center is 69 Brookside Avenue.

Chester in Orange County isn’t far from Middletown, which still has a Paramount Theatre. Listed here