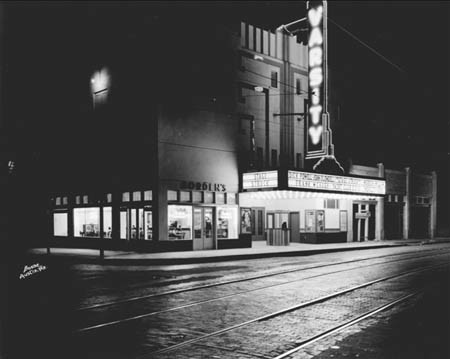 The Varsity Theatre used to be a theatre at the corner of Guadalupe Street and W. 24th Street in Austin. It was opened on November 20, 1936 with Fred MacMurray in “The Texas Rangers”. It operated into the 1980’s. Since closing, it was a Tower Records for years and it is now in other retail use.

I believe the 2nd floor version of the “split” varsity was in the early 1980’s. I worked at UT and we went to the Varsity fairly often. During the great Memorial Day Flood of 1981 a Disney cartoon feature (an old one)was showing, and we were there. When we left the theatre the flood was happening and the stop lights were not working or the street lights. I managed to see the street sign “rio grande” and thought that was funny because it was a river, a grand one. I believe in 1981 the movie we saw was on the upper floor, and it had been newly split to 2 floors.

The restored blade sign was done by Ion Art of Austin Texas. It is 30 x 8 feet. There is an article about the new sign in the June 2012 issue of Signs of the Times.

I had a room mate in the 90’s who had a friend that worked at the Varsity in 1966. On 1 August 1966 he went to make the theater’s bank deposit and when he tried to come back the police had the area around the UT Tower blocked off (including the theater) because Whitman was shooting from the tower. Hours later he finally made it back to the Varsity and it was shot up pretty bad, including the ticket booth that he worked in. The mural on the side had bullet holes in it until the last time it was restored a couple of years ago.

To rdk, it may have played older films towards the end and also showed repertory films but, up until the mid 70’s, they did show first run. The first film I projected there was new to Austin. STRAW DOGS then THE LAST PICTURE SHOW the next day. Showed and saw a lot of first run films there.

I saw several films here in the 80s, including The Gods Must be Crazy and Talkingheads' concert film Stop Making Sense. They had a lot of art-house type films here, and the balcony was unique in that it had been redone as a second auditorium, with a rear projector (or was the rear projector on the first floor?) As I remember, the candy was always stale.

This opened on November 20th, 1936. Grand opening ad in the photo section and below. 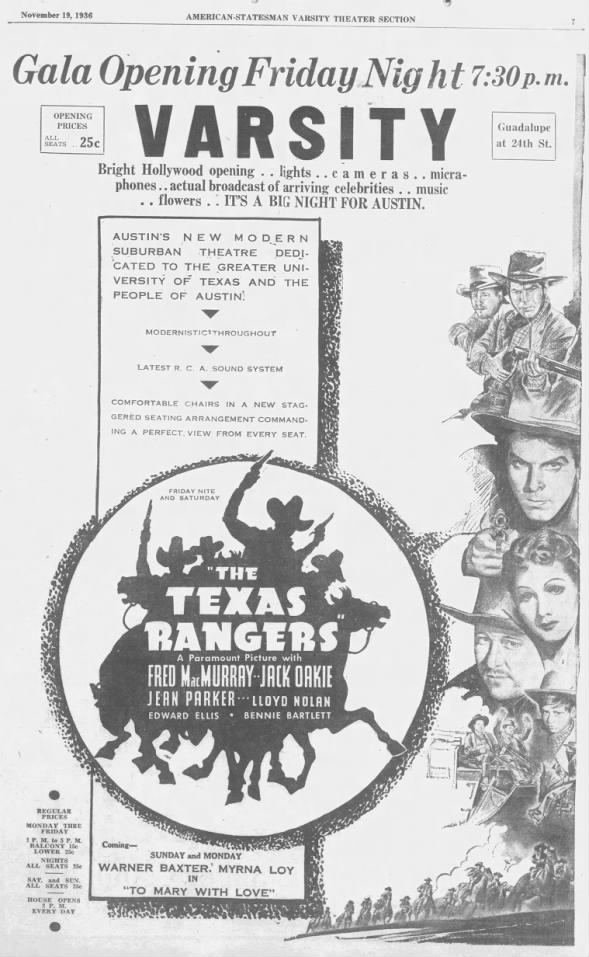