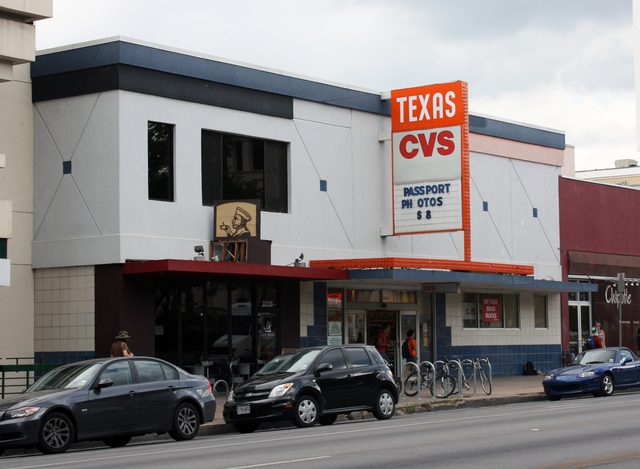 The Texas Theatre opened September 18, 1927 with Lon Chaney in “The Unknown”. It was taken over by Interstate Theatres in the late-1930’s. Later operated by Tran-Texas Theatre. It was still operating into the 1980’s.

Address is now 2222 Guadalupe, but this looks to be the CVS currently. Building size and shape matches. Even the CVS sign looks like the Texas sign, just the lower half rebranded. The Texas name remains though.

The Texas was a porno theater when I moved to Austin in 1985. Spanish language films were shown on weekends beginning sometime in 1985-1986 while still showing pornographic films on weekdays. Later, it became a dollar cinema, I remember seeing a poster advertising “Amadeus” for $1 for many weeks in 1986-1987. Shortly after that it closed. The southern half of the building was remodeled into a coffee shop, “Metro”, and the northern half became the UT Coop’s “Poster Shop”. The “Metro” eventually became another coffee shop “Caffee Medici” and the poster shop became the current CVS. It seems that the building itself is owned by the UT Coop. My dates are a bit vague, sorry.

Looks to me like this theatre was a first-class art house for much of its existence with impressive programming of international films for discerning audiences.