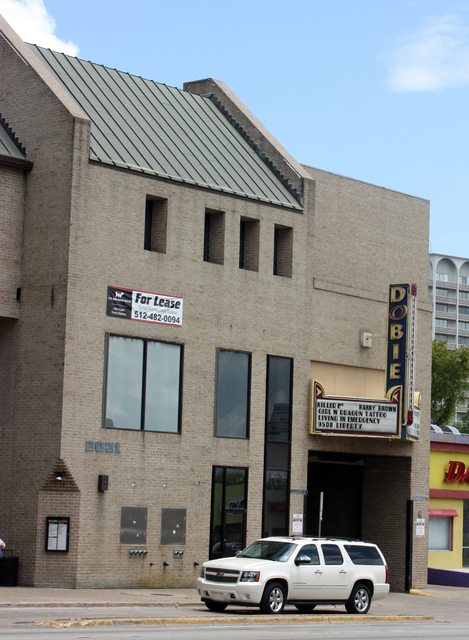 The Dobie Theatre was opened as a twin-screen theatre by October 4, 1973. It was operated by Landmark Theatres since 1999 until it closed in August 2010. The four screen theatre was unique in that each auditorium was done in a specific style, Egyptian, French Tudor, Gargoyle Gothic, and Space Age Art Deco. It is located off the University of Texas campus on the second level of the Dobie Mall.

It still looks like its in tact: the lobby is somewhat open to the public (the theaters I imagine are behind a hallway that’s locked. I spent the summer working at UT Austin and had walked through the mall a few times, it’s was pretty dead (then again it was the summer) with a stores appealing to mostly students. I’m wondering if SXSW will call upon the Dobie to provide the space they’ll be losing down at the Alamo South.

I was the GM that closed down the Dobie for Landmark. It was a sad sad day. I still miss it. I tried to save it every way I could with the little time I had, but it was not to be sadly.

The theatre closed in August of 2010.

I know alot of people would love to see something done with the space, but the rent is crazy expensive and without some serious hard work it could fail all over again.

I miss Dobie. The local scene is still missing some of the great films it would take a chance on.

When I was home (in Burnet) from college (in Abilene), my younger brother and I would drive to Austin to see movies at the Dobie. I remember Lovers and Other Strangers (1970), Sleuth (1972), The Paper Chase (1973). They were probably first run art house movies. But maybe not. Maybe they were repertory movies. They were definitely early 70’s.

didn’t realize they shut it down… I saw Slacker there in maybe ‘92? Kinda fun to see a movie shot across the street from the theater.

Ads for movies at the Dobie started on October 4th, 1973.

I really miss this place, I saw a lot of independent and foreign titles, it had a small scale vibe, people of similar tastes. All too sad it is gone. There was a rumor of a new owner opening it but alas, nothing yet

The Dobie was originally two screens: the main theater was long and skinny, and the other theater was short and wide.

“Slacker” played in the long, skinny one, in 1990. And I know the Dobie was still in the two-screen configuration in 1994, when “Clerks” showed there, and in about 1995, when a shorts program that included “The Spirit of Christmas,” the short by the South Park guys where Jesus and Santa fight it out.

continued… At some point after that, the Dobie was turned into a rabbit warren of four theaters. I can’t remember if they used the original space, or moved into a new space in the mall. But I know for sure that I saw the documentary “Paradise Lost” in the third theater of the remodeled version. It came out in 1996, and I’m not sure when I saw it, but it was more or less contemporaneous with its release. This one is memorable because during the tense closing arguments, the image went way out of frame and I ran out of the theater and was taking one of the corners in the hallway at full speed and ran HARD into an employee coming the other direction, bouncing off his employee bowling shirt, and said, “Frame Paradise Lost!” And he said, “I am!”

So Dobie opened as a two-screen theater, and around the end of 1995 or the beginning of 1996, turned into the four-screen version described here, with the themed theaters.