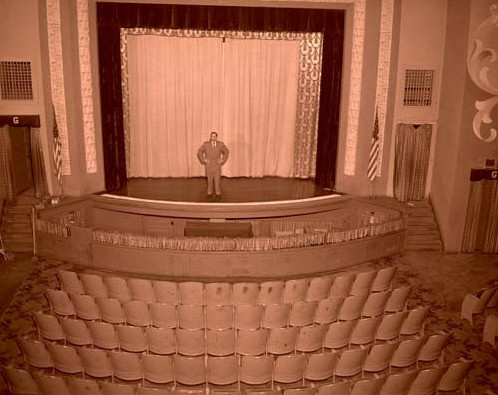 The two story exterior hasn’t changed much at all. The upper portion is in red brick with a white terra border along the roof line. The marquee has remained the same, with a flat U shape that has attraction panels on each end with the name “Grand” on the front. The old vertical sign is still in operation with the wording “Our Pictures Talk” still there under the word Grand.

In 2009, an additional two screens were added.

I would have given a refund within the 20 minutes after that No way.And these theatres that refund movies after folks watch a whole are nuts.

In my theatre days we hardly gave refunds or were even asked for them,the ticket price just bought you a seat, we could not know if you would like the film or not, if that was the case you could watch the whole movie and said you did not like it and get your money back,same as a concert or play or any other event.The persons picked to see the film.

right on tisloews,WHERE ARE ALL THE REAL THEATRE MANAGERS AT THESE DAYS ?

Well, I never had a problems with refunds especially when playing films like “ON GOLDEN POND” which i did refund a few at Regency because the ladies came out complaining about the dirty lanuage.Ladies that old still saw the PG rating as Family friendly,In those days PG pictures such as “BILLY JACK” were loaded with Adult language and Quite a bit of nudity.But to give someone a full refund after watching the entire film is crazy.I had one lady one night at Columbia 1 and 2 want her money back after watching the whole movie.Needless to say,She didn’t get it a penny.Love working with the public everyone should be forced to do it.

G.I. Joe Rise of Cobra? Why would you waste money on that anyway…You’re lucky she didn’t give you a boot in the behind…

Here’s a link to some 2009 photos on Flickr. Looks like they covered the whole 2nd floor with metal panels. Personal opinion…it looks crappy. http://www.flickr.com/photos/sethgaines/7051728617/in/contacts/

Avoid this “establishment” at all cost!! First of all, this theater, unfortunately is the only theater in what is euphemistically called the “downtown area” of Williston, ND…it is a dirty, filthy, grungy facility 9you know it’s a bad place when you see cockroaches on the bathroom wall!) that should for all intents and purposes be condemned! Second of all, it looks like nothing has changed since the last negative posting about this place back in 2009 by DirectorPrime! I had a similar experience with a certain staff member when I went to go see “Transformers: Age of Extinction”…I paid good money to see the film (in 3D format)…$11.00..and I had to deal with uncontrollable brats behind me kicking my seat and talking constantly…finally at 1/3 of the way through the movie I couldn’t take it and walked out…went to the front counter and politely asked for a refund, I explained the reason for it…and the skinny, balding individual (who claimed he was the on duty manager) became immediately confrontational with me and copped an attitude and stated to me “No, I am NOT going to refund your money. We don’t refund peoples money nor do we give rain checks for future showings!”. I again, politely asked for a refund and was told “No”…I stated to this pathetic “individual”…“You mean to tell me, that since I had to deal with people talking and kicking my seat constantly, you are not going to refund me a lousy 11.00?” he smirked at me and said “that’s right” When I asked if this was the theater policy (again, politely) I was told that I needed to leave the theater immediately. I work for a major engineering firm that has a satellite office in Williston, ND…you can definitely be sure that I will be telling all of the employees I work with (I am in Human Resources) about my experience and how they should avoid the place. That “individual” had no right to speak to me that way and in the era of Social Networking sites (Professional and Non-Personal) it’s not a very good idea to insult a customer and treat them in such an openly hostile and rude fashion. I am going to make sure that during my stay here in the town of Williston, ND? I am going to let everyone know that they are better off going to go see a movie in either Sydney, MT or over in Minot, ND. It’s a shame that since the last negative and spot on review of this place, back in 2009? 5 years have elapsed and The Grand Theater still has the same despicable and rude people working there.

The owners of this theater have been planning to build a new 14-screen multiplex in the Sand Creek Center, a new, 200-acre commercial development on the outskirts of town, since early 2012, but I see nothing recent about it on the Internet. They might be having a hard time getting the project financed. This item from the winter-spring 2012 issue of the North Central NATO newsletter said that ground was to be broken for the theater later that year:

“Tom and Jane Agnes announced they will build a new 14 screen theatre in Williston, ND. The new complex will replace their current five screens located downtown and their drive-in. The new theatre will be called the Sand Creek Cinema 14. Williston is located in the middle of the North Dakota oil boom and is experiencing rapid growth. The new complex will include two large format screens. All auditoriums will have stadium seating and digital projection, Dolby Digital 7.1 stereo sound. A spacious lobby will feature new concession amenities. The theatre will be built on the west side of town in the same shopping center that will also house a new Menards. Ground will be broken later this year.”

the only recent news I can find about Williston concerns a huge fire that has been burning for the last couple of days at an oil supply company. With such live spectacles, who needs a movie theater? In any case, Williston’s estimated population is about 20,000, and I doubt it is big enough yet to support 14 screens. The banks are probably reluctant to finance such a project for a small operator, which could account for the two year (so far) delay. If the developers of Sand Creek Center are anxious to get a theater into their project, they might have a better chance of success by dealing with a big chain like Cinemark, which would have better access to financing.

The Grand Theatre has made the conversion to digital projection with RealD 3D. Their website