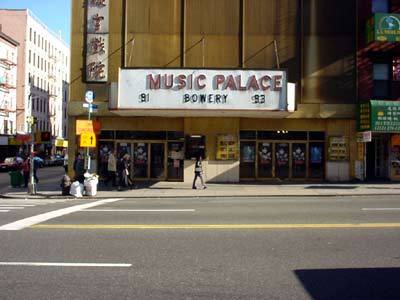 One of Chinatown’s many theatres. The building was constructed in the late-1890’s to the plans of architectural firm McKim, Mead & White. In 1913 architect Louis A. Sheinart was employed to draw up plans for a theatre in the building. It was opened as the Universal Photoplay by 1914.

There were further alterations made over the years and at one time it was renamed World Theatre. It became the Chuan Kung Music Palace in early-1970’s screening Chinese movies.

The Music Palace was THE REAL DEAL NYC mid-1960s-70s for first-run kung-fu films—-beautiful color/scope prints, subtitled [English bottom/Chinese right side] in the classiest movie theater in lower Manhattan. We saw “Come Drink with Me” and “Jade Raksha” here—-could never get enough of Chen Pei-Pei, who’s still in there swinging, bless her heart. Angela Mao-Ying was another fave. The Music Palace specialized in Golden Harvest releases, some Shaw Bros. The Sun Sing and Canal Street played films of lesser producers, and were definitely scuzzier. The Governor on Chatham Square [demolished, now Hong Kong Supermarket, where I shop]played Cantonese films exclusively—-the majority of NYC were Cantonese, until the Asian Exclusion Act of 1924 was repealed 1964. Isn’t it strange how the food/films of our youth retain a special place within us—-I’ve eaten many kinds of Chinese food, by I always reset to my default: Cantonese. The kung-fu films of today, with their CGI-enhancements, just don’t have the mega-ton blast effect of Chen Pei-Pei laying waste to regiments of bad guys, tornado-like, with two broad swords. Golden days, gone forever.

I went to that theatre every Saturday as a child in the late 1940s living on the corner of Mott and Hester. The marquee said “Universal” but it was always referred to as “The Dumps” and I thought that was its other real name. It was very seedy. Very crowded with children during Saturday matinees. Two ushers with flashlights were kept very busy keeping kids in their seats and reasonably under control. The bathrooms were filthy and scary and we avoided them. We’d see previews of coming attractions, cartoons, a movie, and one installment of a serial that ran for months. When the movie was interrupted by a technical problem with the projector or film, which happened frequently, we kids would stamp our feet in unison, chanting, “We want movies! We want movies!” In the lobby, on the way out, we could pick up a leaflet, densely printed blue-on-white, describing the coming attractions. Occasionally we’d lie about what was playing (“Gene Autry”)to go see an adult movie (Betty Grable, Put The Blame on Mame, Boys) or Shadow On The Wall. “The Dumps” was a big part of my childhood!

I also remember seeing “Flying Tigers” and “God Is My Co-Pilot” in that theatre.

I used to go there as a little kid…the Dumps…remember seeing Sheherezhade there! and the colored candied? popcorn, the ushers and the stamping whenever the projector faltered, yes. Many years later, I would ride the bus (Ave B?) past another Chinese theater at the start of East Broadway, I suppose that’s the one mentioned as at the Square? Colorful posters on the outside, I always meant to stop in sometime to see what I might see, but alas, never did. Sorry to hear they’re all gone now.

what was the EXACT date of closing with link if possible.

Great movie theater, 1982-1986. Played the full range of Chinese movies, mostly from Hong Kong. Incredible violence, endless struggle. True, it wasn’t “elegant,” but that was it’s charm. You could just lounge around and no one bothered you. People talked when they felt like it, at clams, smoked, drank soda. NO ONE SAID A WORD TO ME IN TWO YEARS, except on the way out of a film called BEFORE DAWN.

Very strange movie, a guy said “genius” on the way out.

Never saw any fighting there. Everyone very, very laid back. Five year old kids running up and down the aisle. A great place to relax and study the world of Chinese fantasy, which focuses on REVENGE.

According to an index card in this PDF from the Theatre Historical Society (as well as in the AIA Guide to New York City), this long-time movie house (last operated as the Chuan Kung Theatre according to the AIA guide) began in the late 19th century as a three story store building designed by none other than McKim, Mead & White, one of New York’s most famous architectural firms.

The index card says that plans to alter the building to accommodate a movie theater were submitted in July, 1913, (Louis Sheinart, architect) and the Universal Photoplay was in operation by 1914.

The house was altered several times over the years, with its listed seating capacity increasing from 281 in 1925 to 450 in 1931 and 546 in the 1940’s, but the only alteration credited on the card is a marquee installed in 1941 by architect Sol Oberwager. The house was renamed the Music Palace in the early 1970s.

Joe, if that can be confirmed, this might become the longest running movie theatre in, at least, New York history.