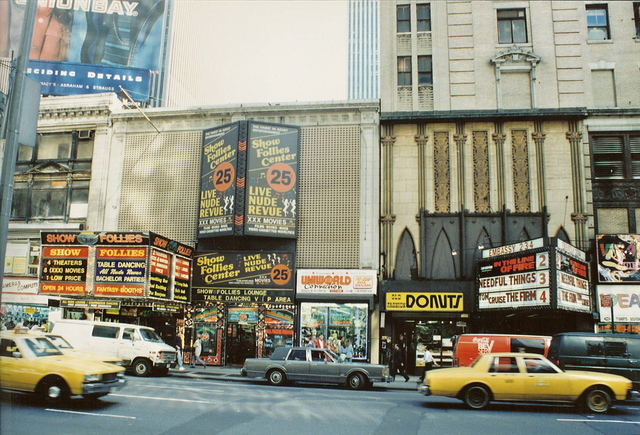 Suprisingly in the mid-1980’s it went back to showing commercial movies as the Lesser Cine Twin. It started out showing second and third rate first run (“Garbage Pail Kids”, “He’s My Girl”). The grosses were never great but the theatre being open to 4AM helped the box office. Then the owner made a deal with City Cinemas for almost two years. One of the “Lethal Weapon” movies actually opened here first run on Broadway in both of its screens.

As the Fantasy Twin, although I don’t remember it being called that.

That pic above as the Fantasy I believe was the last time it was used as a theatre. Here it is as a Spanish Twin
View link

Some films that the Cine Twin played in 1987 (the first year that the theatre was listed in the New York Times):

The theatre began its association with City Cinemas around November or December 1988. The first two movies I noticed on the City Cinemas block ad printed were Crossing Delancey and Mystic Pizza (both films deep into their runs).

Looking at the photo section it looks like Show Follies and Peepland were next to each other at the same time and that Peepland was NOT another name for this theatre.

Just posted a pic I found on a Facebook group (The Forty-Deuce), labeled 1984 and credited to Kent Almqvist. It shows this theater under the banner of “The Big Apple Theater,” showing Caligula on one screen (in English with Spanish subtitles) and porno double bill on the other. Same Big Apple lettering and logo as the former Globe down on Broadway between 43rd and 42nd Streets. I guess we can add that to the list of names for this cinema. I don’t personally recall it ever being the Big Apple, and 1984 would have been a time of frequent visits to the area for me!

This site is now the LOL comedy club.

Note that it’s been the LOL comedy club since no later than August 2015, per Google streetview.