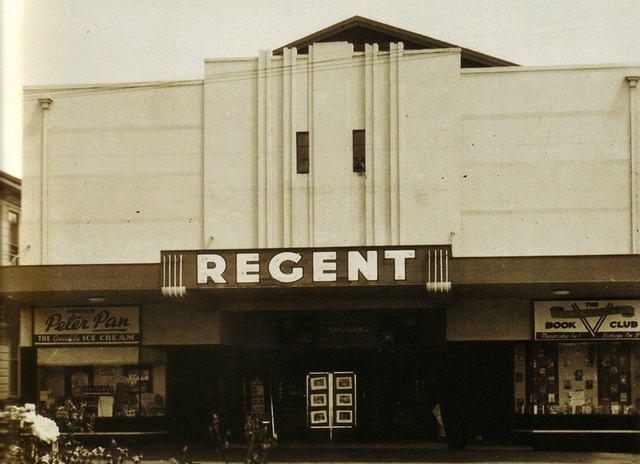 Regent Theatre, built and operated by Kerridge Odeon Theatres to replace previous structure (Olympic Theatre, by 1914 the Kings Theatre) which was built in 1890.

The Regent Theatre opened 23rd February 1940; opening feature Errol Flynn in “Dodge City”. Designed in a late Art Deco style, the original seating capacity was for 600 in stalls and circle. Neon and concealed decorative lighting were a feature. Closed February 1977.

Purchased by local drama society August 1977 and converted to two auditoriums (one for movies in the former circle with seating for 187, one for live shows in the former stalls – name changed to Upstairs Downstairs Theatre – re-opened November 1977). Most internal and external lighting features removed at this stage (many were not in working order).

At present movies screened only Friday, Saturday, and Sunday plus extra sessions during school holidays in the upstairs screen which now has 175 seats. Dolby stereo sound system installed 2000. It used 2 projector change-over system (Walturdaw 5 projectors c.1935) and Ashcraft Suprex carbon arcs until late 2007, when a new Kinoton projector and platter and Dolby Digital sound was installed. There is also a DVD/Hard drive server system with a Panasonic PT-DW5100 Video Projector, which allows access to a great choice of films. Owned by Pahiatua Repertory Society and operated by Pahiatua Upstairs Cinema Society.

The downstairs auditorium is used for live performances only and has no projection equipment or screen.

According to Wises Street directory listing this cinem,a was opened as early as 1924. Closed in 1985. There was no listing for “Kings Theatre” in Wises 1924 edition.

The Upstairs cinema opened in 1984.

I believe it became known as The Kings Theatre when talkies were first introduced. It was previously known as The Olympic Theatre and was originally built in 1890, by a Mr Stewart the owner of “Stewarts Family and Commercial Hotel” next door and was known then as Stewarts Hall.

An October 2007 photograph of the Regent Theatre:
View link

I recently came across an advertisement in the Pahiatua Herald of 14 Feb 1914, for a production of the comic opera “The Cingalee” held at The King’s Theatre Pahiatua. So we now know that this theatre was known as the “King’s Theatre” at that date. :–)
Also we only have one screen. We have 2 auditoriums but one is used only for live productions and has no projector or screen.We also have only 175 seats now.
And of course it is a “Kinoton” projector we have and not “Kinetron”.
( I don’t know how to edit the information already on this page, hence these comments.
Bruce Lea, Manager/operator

Thanks for the additional information Bruce;
I have made the amendments to the introduction. Can you let us know the seating capacity of the downstairs auditorium to complete the information on the building, as we list it as movies and live performances.

The Regent licensed by the Cinema Licensing Authority (Govt Dept) and open as a cinema before 1920.

The downstairs auditorium can seat 150. The seats are not cinema seats as such but are soft-furnished chairs some of which are used with tables as sometimes the live productions in this auditorium are presented in “theatre-restaurant” style with a meal and bar services avaialble before the show. The downstairs auditorium is the home of the Pahiatua Repertory Society who own the building and who put on 3 or four live shows every year.
Here is a link to our web-site: http://www.nzcinema.co.nz/cinemas/1018.php