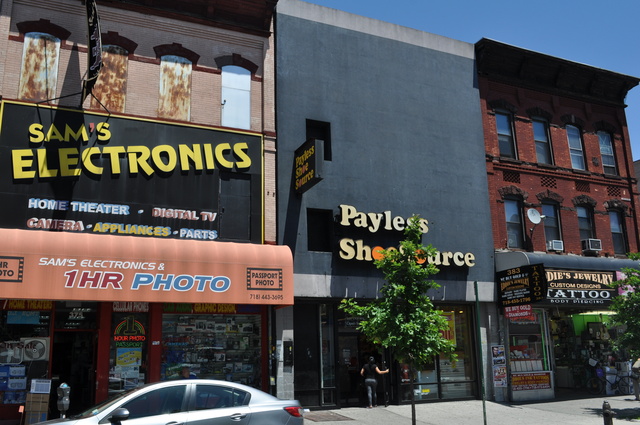 Listed in the American Motion Picture Directory 1914-1915 edition. This was a small silent movie theater located on Knickerbocker Avenue and Stanhope Street. It operated from 1909 to 1915.

Still one more point on this item. While no Building Dept. action involved 383 Knickerbocker prior to 1915, a number of such actions affected other Knickerbocker Ave. buildings on that block as early as 1900. Since the the entire blockfront was almost certainly constructed at the same time, it seems pretty clear that the building that hosted the Ridgewood Casino was the same building that stands today.

Thus, unless compelling arguments to the contrary can be presented, I believe the theater should be listed as closed but not demolished. I would really love to hear some comments on this item – even those that demonstrate that I don’t know what I am talking about. Please respond.

The key point here, at least for me, is that all of the buildings on the block-front containing 383 Knickerbocker were almost certainly constructed at least a decade prior to the date on which the Ridgewood Casino appeared in the records. Unless a clearly erroneous address was provided at that time, one that would have placed the theater on an entirely different block – certainly a possibility – it is difficult not to conclude that the building that hosted this tiny theater still exists. (Slight discrepancies like the 381/383 Knickerbocker that exists here have cropped up many, many times in these pages.)

Well, an on-site visit has undercut one of my stronger arguments regarding the Casino’s current site. Specifically, the two buildings with 1900 era building permits were NOT part of the same development. Instead, they are wood frame buildings that definetely were constructed before their masonry built neighbors. (This is a problem that occurs when you rely too much on the internet for research.)

However, it still seems pretty clear to me that the brick buildings were still constructed before the Ridgewood Casino became history.

So, this is still a pretty close question.

No, the building is brick, but it conforms to the construction designs that dominated the first decade of the last century.

This is why the question is close.

John, is this the corner where you say the Casino may have been? I don’t feel it could have been any of the other corners:
View link

Bway, the theater was situated at the NW corner of Knickerbocker and Stanhope, where the “Tip Top” and the “Tattoo” stores currently occupy the site. The theater might also have been located in the adjacent lot, where the Payless shoe store is currently situated.

Since the corner building (given its architectural qualities) seems to have been constructed prior to the mid 1910’s – the time when the Ridgewood Casino went out of business – I have opted for the corner building as being the site for what was a tiny and rather primitive nickelodeon-type movie house. But it is possible that the old theater was demolished and replaced by the current occupents of this site sometime in the 1910’s. In short, this has the makings of an interesting detective story, something hopefully more productive than the Ridgewood Follies!

First, it lists a specific cinematic lifespan of 1909 to 1915 and cites a Morris Goodman as the theater’s proprietor.

Second, and of pertinence to the building’s status, it notes that, in early 1916, just after it closed as a theater, the building was altered to accommodate a store and two family dwellings. This layout is very similar to that of the building currently occupying this site. While there is some confusion with the exact street address – not an unusual occurance – the location of the building seems pretty clear. This provides a strong, if hardly conclusive, argument that this small theater was situated in a building that was not demolished but still exists. Let the debate go on!

By the 1940’s, the vertical sign was still on the theater, and was operating as a shoe store.

Bway, this is very interesting and would provide further evidence that the old theater was situated in the building that still exists and was not located in one that was demolished prior to the construction of the current structure. Unfortunately, the link you provided did not go through. Can you try again? Thanks as always.

The link works for me. Try copy and pasting the whole thing into the address bar of your browser. The vertical sign says Miller Shoes"