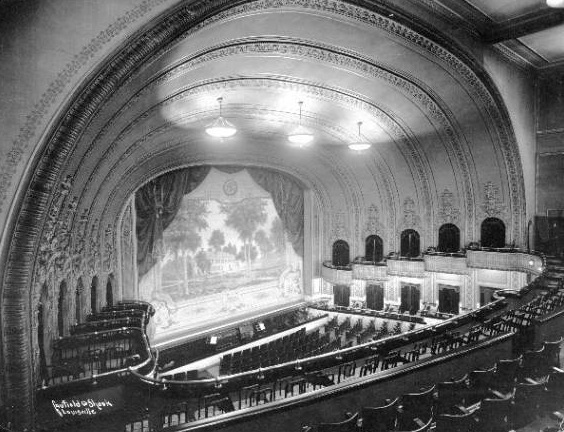 Opened at Fifth and Walnut Streets in 1913, this 2,800-seat showplace originally was a vaudeville house but later began to shows movies as well. The National Theatre was operated by Y & W Management Corp. by 1950. It lasted until 1952, when it was unfortunately bulldozed away for a parking lot.

I’m looking for a Rapp and Rapp designed theatre in Louisville that was under construction in 1915. I have the following article from the Rockford Morning Star for Sunday, February 31, 1915 which states the following in an article heralding the opening of the Palace Theatre in Rockford, Illinois: (note the end)

“…Messrs. George and C. L. Rapp have specialized in theater designing and among their latest masterpieces at the New Oprheum in Champaign, the Orpheum in Quincy, the Columbia in Davenport, Ia., the New Palace in Fort Wayne, Ind., the Hippodrome in Chicago, the Ringling Theatre in Baraboo, Wis., and the Palace in Rockford. They also have theaters under construction in Louisville, Ky. and Grand Rapids, Mich.”

According to the records of the New York Terra Cotta Company, the National Theatre was designed by the architectural firm of Joseph & Joseph, with Albert Kahn associated. Joseph & Joseph, founded in 1908, is still in business.

A 1928 photo of the National Theatre appears on the Historic-Memphis.com website’s Theatre page. Here’s a link to the page.

National Theatre in Melbourne, Australia (built 1921 as The Victory)still stands and is remarkably similar. Website www.nationaltheatre.org.au

I believe my Dad saw Billy Eckstine and Connie Boswell perform here in early 1945 during his basic training at Fort Knox.