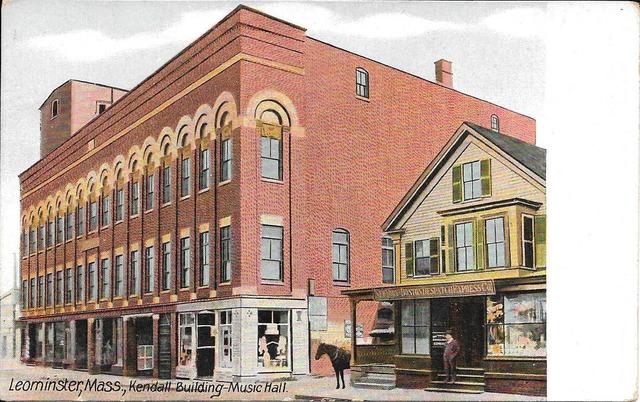 Opened January 8, 1923, the Rialto Theater was one of at least three classic movie theaters in this Massachusetts city which is just south of Fitchburg. Behind it is located the old rail depot and abandoned rail line.

Although the exterior clearly suggests this building’s former use as a movie theater, the interior seems to have been gutted and put to other uses. It now serves as the home of the Christian Life Center. The entranceway reveals what was part of the original entrance/lobby area, and ceiling details remain intact.

Wow – thanks for the update and for the added detail on the Greenfield theatre. trying to piece together a list and information on all the Latchis Theatres in New England. Peter Latchis was my great uncle.

There was Latchis and Conistan Theater in Newport,N.H. which I attended as a child with my Family in the summertime during the 1950’s. Don’t know if Latchis ran both of these or not. Try the Keene,N.H. site on Cinema Treasures for more info. Good luck!

cine paradis- I typed out the list of Latchis theatres as of 1942-43 in a posting to the Latchis page in Brattleboro, made on March 7, 2007.

Here is a January 1946 article in the Fitchburg Sentinel:

LEOMINSTER, Jan. 10-The McEvoy Amusement Co. has leased the Plymouth theater and the Rialto theater to the P&R Theaters, Inc. The officers of the new corporation are Edward L. McEvoy, president, and William F. Yager, treasurer.

For the past several years the theaters were operated by the Leominster Allied Theater Corp. with Mr. Yager as manager. Of recent years the Rialto has been closed and the corporation operated only the Plymouth theater. The properties leased by the new corporation includes the Rialto on Main street, the Plymouth on Mechanic street and a large tract of land on Mechanic street where a gasoline station is located.

With the announcement of the new corporation the McEvoy family resumes operating control of the two theaters which were built by Mrs. Rosina M. McEvoy and her late husband, Thomas A. McEvoy. Mr. McEvoy, president of the P&R Theaters, Inc. is Mrs. McEvoy’s son and Mr. Yager is her son-in-law. Mr. Yager said today that while there were several possibilities under consideration relative to the reopening of the Rialto, plans were still in the indefinite stage.

Boxoffice Magazine of Aug. 14, 1948 reports that the Rialto, not used regularly for several years, was being considered for purchase by the Leominster Recreation Center.

My aunt who was 90 died last Sept. and I have a Picture of my aunt Lorraine Richardson on the sign with Danny Duggan’s name on top. Can any one tell me about when this picture was taken? Thank you,sweetoldgrandma.

This is a blog post I wrote regarding the Rialto Theatre in Leominster MA: http://movietheaterhistoryjaboschen.blogspot.com/2013_01_01_archive.html