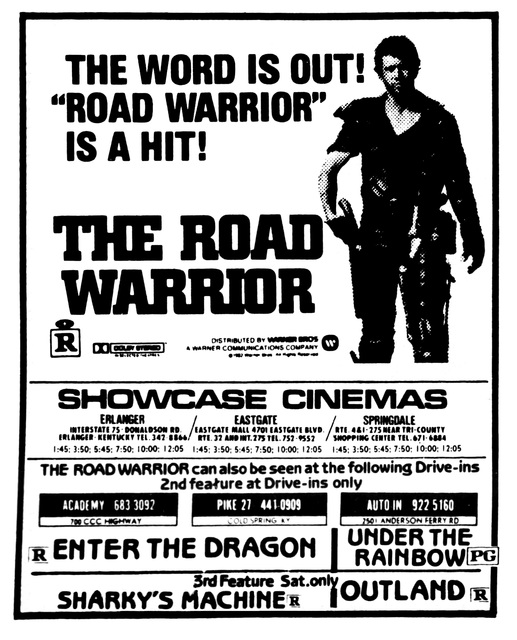 The Auto-In Drive-In was opened April 22, 1947, screening the 1945 musical “Diamond Hoseshoe” with Betty Grable, Dick Haymes and Phil Silvers. It was opened by Harry Brown, Edward J. Moore and Jerome J. Kunz (dba Auto-In Theatre Co.). All three gentlemen were employed by the county. In July 1949, they would open the Dent Auto Theatre.

The new ozoner could park 400 cars with RCA in-a-car speakers. Theatres Owner Corp.(TOC) from Cincinnati, OH was the booking and buying agency starting in 1952. In 1968, Marshall H. Fine (dba Associated Theatres from Cleveland, OH) took over the operation of the Auto-In and the Dent Auto. Fine formed the Cincinnati Theatre Co. to operate his Cincinnati interests.

In May 1971, Cincinnati Theatre Co. sold the Auto-In to Roy B. White (dba Mid-State Theatres). The sale also included the Dent Drive-In and the Twin Drive-In. I believe the last operators of the Auto-In were Holiday Amusments from Hamilton, OH. until 1982 when it closed for good. The Auto-In was demolished and an office building is on the site.

It was vibrant because it was near Western Hills High School and it ws full of noisy kids most nights. Couldn’t really take your family there on a Friday night!!! At least toward the end. The grounds of the drive-in now house a medical facility and a bakery.

Gee whiz, I haven’t heard of this one either! If only it would’ve survived, I would have given anything to see a movie here! (I’ve never even been to a drive in.)

okay,Believe or not this same double features plays at the Hilltop Drive-in in North Augusta, S.C. “MAGNUM FORCE” and “THE MACKINTOSH MAN” . This double feature is also playing at the TWIN DRIVE-IN in Cincinnati.August 9 1974.

The last time I was at the Auto In was whatever year “The Bad News Bears” was playing and I took the kids to see it. Had a Ford station wagon at the time and I would back it into the space and the kids would sit on the tailgate watching the movie. The wife and I had lawn chairs along side of them. Those were the days. I really miss those days!!! The kids are now grown and on their own.