Covedale Center for the Performing Arts 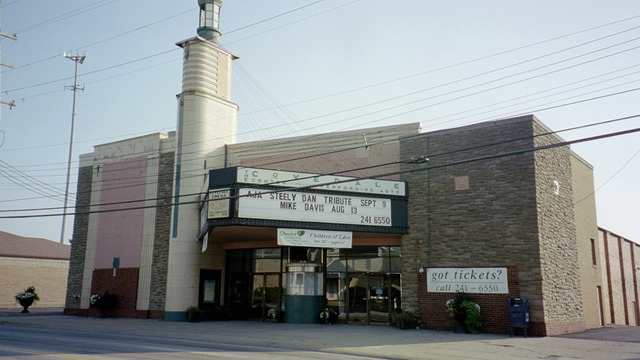 The Covedale Theatre was opened March 20, 1947, and was independently operated by the Ackerman family. It was twinned on March 31, 1976. In 1997 it was taken over by the Cinema Grill Systems Circuit of Georgia and was renamed Covedale Cinema Grill. It was closed in 2001 and became a live performance venue.

This theatre was the Covedale, not Coverdale Theatre. It is now the Covedale Theatre of the Performing Arts. After the Covedale closed, it was empty for years. then they tried the “Cinema Grill” concept a couple of years ago and it bombed. Now, it is renovated and is now a Playhouse. I believe it is doing well at this point in time. I miss all of the neighborhood cinemas, though.

Built by the Ackerman Family, “the Covedale” was the most up-to-date thing in post-war cinemas. The Grand Opening, on March 21, 1947 featured fireworks and searchlights in the sky while the original 924 seats were filled to capacity for a showing of Til The End of Time starring Dorothy Maguire. The cartoon feature was Rhapsody Rabbit starring Bugs Bunny.

For nearly thirty years, the Covedale enjoyed a treasured place in the hearts of Cincinnati movie-goers as one of the last great, full-sized neighborhood movie palaces. But in the mid-1970s, face with increasing competition from the multi-screen cinemas, the auditorium was split into two rooms, each showing movies on smaller screens. By the early 1990’s, after a time when the Covedale was shut down, the building was renovated into a Cinema Grill, offering second-run movies and a diner.

In 2001, the second Cinema Grill operation closed for good but a campaign to save the Covedale and revive it as the Covedale Center for the Performing Arts began to catch fire. Thanks to community groups, the City of Cincinnati and numerous foundations and individuals, the Cincinnati Young People’s Theatre was able to purchase the Covedale and begin renovations. In only two short months (May 24 to July 26) a small army of volunteers, contractors, and construction experts removed the dividing walls and movie screens, redesigned the seating, built a stage and sets, installed technical equipment and brought the Covedale back to life.

Now, after the grand opening production of our teen theatre project, West Side Story in 2002, the Covedale has once again undergone an amazing transformation. We’ve added seats to bring capacity to nearly 400. We’ve upgraded all our systems and continue to restore the “Miracle on Glenway” to a professional theater and performing arts center.

The Covedale Theater originally had hot water pipes hidden within its front sidewalk so that during the snowy season all the manager need do was push a button in the lobby to melt the white stuff and offer his ticket buyers an easy access to his picture show. The hot water was produced by the theaters boiler, many years ago the system ceased to operate. So its back to the pick,shovel,and plow for the current occupants.

The Covedale Theater was constructed by F&Y Building Services out of Columbus,Ohio.

The Covedale Theater, now a Performing Arts venue has recently restored their distintive roof level beacon light which was removed in Sept. 2007 for needed rebuilding. So nice to see a landmark once again intact.

Well, for the record on August 9, 1974 the COVEDALE CINEMA was showing “BORN LOSERS” a cheap re-release of the Billy Jack movies to cash in on Tom Laughlin kicking folks as Billy Jack. It showed at 7:30,9:30 and 11:25. rated PG. The Covedale was a Mid-States-Cinemas.

March 31st, 1976 grand opening as a twin also in the photo section

At the expiry of a 50-year lease n 1997, the Covedale received a $150,000 makeover and relaunched as the Covedale Cinema Grill. It was a franchisee of the Cinema Grill Systems Circuit of Georgia. It was split into two screens of 200 patrons each opening January 8, 1998. It closed in 2001 and was transformed to a live venue.