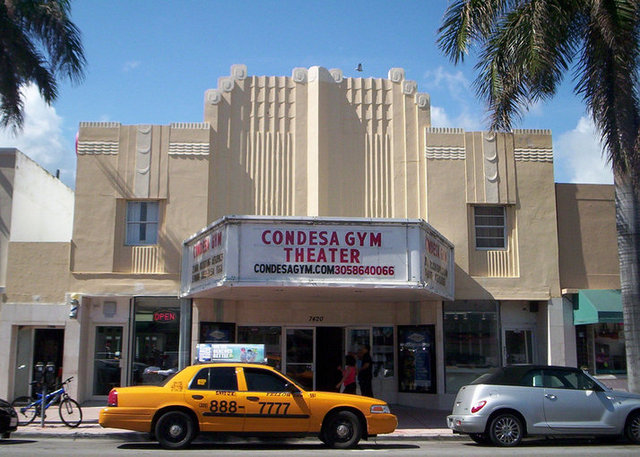 This mid-sized theatre was built in 1938 for and initially operated by Weingarten Theatres. Later taken over by Wometco Theatres. From time to time they ran first run films and second runs. I remember in the 1970’s the theatre ran the American Film Theatre subscription series which included “A Delicate Balance” with Katharine Hepburn.

When Wometco gave up on this theatre it ran as an independent house for a while. I believe it shuttered in the 1990’s. When last I heard the theatre had become a gymnasium, which has since closed. By early-2017 it had converted to retail use.

This is from the Condesa Gym Website that occupies the former theatre: ince Condesa Gym opened its doors in 1984 in Mexico City by owner Ricardo Roman the gym continued to grow in popularity. Roman knew it was time to open Condesa Gym in Miami. We believe that our membership is, and always has been different than at other gyms. Condesa Gym is like an extended “fitness family” than a traditional health club. A place that feels like home. In part, that’s because we’re owner-operated and have been since our beginnings in Mexico. It means we’re personally committed to deliver the ultimate fitness experience. We take your satisfaction very seriously. We have a commitment to our community, to our members, and to our staff. That commitment is the reason that we’re here and growing and it’s one of the best reasons for joining Condesa Gym.

At Condesa Gym we have all of the latest cardio and strength training equipment. As well as the most dynamic fitness classes that include Spinning, Body-Express, Zumba, Yoga, Tai-chi, Aerobics, Boot Camp and Many More. At Condesa you will find a supportive and energetic environment that will help you achieve your goals. Our trainers are the best in the business, they can help you get in shape, and they’ve helped everyone at Condesa Gym accomplish their dreams.

The characteristic W logo that appeared under the old facade did not stand for Wometco but for Weingarten. This same W can be seen on the Cameo marquee in South Beach.

aeterna, who was Weingarten?

Miami Beach, Fla. — Herman Weingarten, of New York, has announced a program which will include the building of a circuit of 12 theaters in this area, at an investment of $1,250,000. Weingarten began con- struction several weeks ago of the first theater, the Cameo, in the pro- posed string, a $100,000 structure at Washington Ave. and Espanola Way. The second will be on Collins Ave. and is to be known as the Surf Theater.

During the past 25 years Weingarten has constructed some 40 theaters and continues to operate some of them in Brooklyn and Long Island.

Associated with Weingarten in his
building activities is his daughter
Miss Henrietta Weingarten.

I visited North Beach on March 11, 2016. The doors to the Surf were papered over so the gym is apparently gone. (I Googled and found photos of what the interior looked like when it was Condesa gym.)

If you visit the Subway restaurant across the street and sit near the front window, you can enjoy a full view of the Surf and contemplate it as I did.

The inside of the nearby Normandy was under construction, with a table with blueprints laid out in the lobby.

Both theaters still have their marquees, which I hope are kept if the area is “revitalized” (which was somewhat dumpy).

Last night I sat in the Subway restaurant across the street like I did two years ago as mentioned in my previous comment and enjoyed what they’ve done to the front of the building: red neon lights around the perimeter of the marquee with the name “Surf” in the middle, small white lights that look like neon from afar underneath the marquee illuminating the entrance, and twinkling lights around the edges of the poster boxes.

The spirit of all this felt to me like they had made some effort to honor the building’s former life as a cinema.

Inside the fully renovated interior I did not notice any trace of the theatre but there’s a ton of items to look at in there and the environment was pleasant. (Look up the address on Google Maps for interior/daytime exterior photos.)