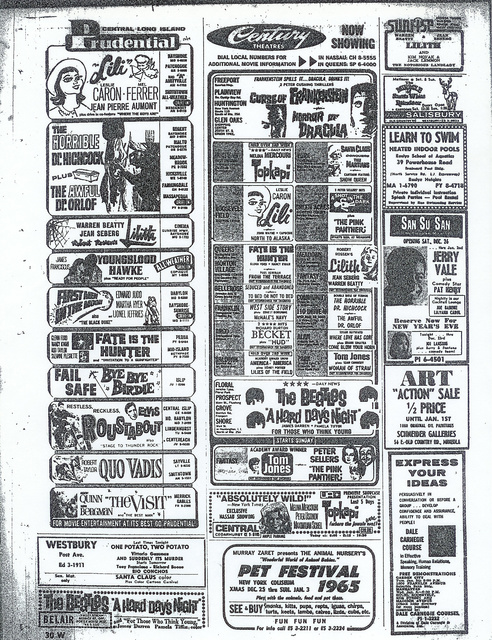 A surviving downtown theater from its opening by Associated Prudential Theaters Inc. on April 5, 1947. At some point the Islip Theatre was triplexed.

The Islip Theatre’s colorful old neon marquee continued to welcome moviegoers until 2006. In January 2013, the theatre began a renovation, and reopened June 20, 2013 as the Islip Cinemas.

Wally: What you hit to make it big and red was the # key. Cinema Treasures is now supporting Markdown code as well as standard HTML in its comment forms. In Markdown code, the # (hash sign) placed at the beginning of a paragraph will turn the block of text following it large. I don’t see the HTML command for changing font color in the page’s source code, though, so I don’t know why it’s turning red.

If you avoid starting paragraphs with a hash sign, this won’t happen again. Hash signs are OK anywhere else in your text. Even placing a single dash in front of the hash sign when you want to use it at the beginning of a paragraph will prevent the auto-formatting program from reading the sign as Markdown code:

I loved islip it was always reasonable and close, I pass by it all the time, and i remember seeing 40 year old virgin there and a bunch of others, sad to see it sitting vacant, deteriorating.

Still closed as of this week. Here’s the direct link and here’s the text of Wally’s post:

The aroma of hot buttered popcorn will soon be wafting through the long-shuttered Islip Theater.

The circa-1946 venue on Islip’s Main Street, closed since 2006, could be playing first-run movies by mid-March, through a planned remake of the community touchstone.

Rudy Prashad, who owns two theaters in Queens, has signed a long-term lease to operate the three-screen theater, which seats about 900. He’s spending $500,000 on renovations to the interior, including paint, carpeting and new seating. The theater will be outfitted with new digital projectors for Real-D — the latest in 3-D technology.

“I love the area, it’s a beautiful, beautiful neighborhood,” said Prashad, who operates the Center Cinema in Sunnyside and Main Street Cinemas in Kew Gardens. “I just want to keep it as a neighborhood movie theater.”

The theater was once the pulse of Islip’s entertainment district, with patrons lining up to buy tickets at a marble box-office. In 1982, the single theater was turned into a three-screen movie house; and in 2006, with increasing competition from mega cineplexes, it closed.

James Nazzaro, a real estate investor who bought the closed theater at auction in 2006, has tried since then to lease the property. Several deals — which would have turned the venue into a day care center or a symphony hall — fell through.

In 2009, Nazzaro withdrew an application before the town’s Planning Board to demolish the building and build a day care center.

When Suffolk County Legis. Tom Cilmi (R-Bay Shore) posted news on his Facebook page earlier this month that the theater was set to reopen, the message garnered more than 600 likes.

“It’s a tremendous shot in the arm for the community,” Cilmi said. “Main Street in Islip has always enjoyed the community’s support. We have a pretty successfully cohesive area in the Islip hamlet. This missing piece has always been like a blemish on our community. Now that blemish will be healed.”

Prashad, who lives in Great Neck, said he has been greeted warmly as he has supervised crews working on the renovations. “We will have passersby knock on the glass door and say, ‘What are you guys doing? Is this going to be a movie theater?’ They’re very excited.”

Prashad said he anticipates keeping prices “very low,” – in the range of $2 less than the average movie ticket — and that free municipal parking will be available.

“I want to attract neighborhood folks,” he said. “There’s no reason for people to have to go far … to go to the movies. They should be able to walk and drive a close distance and enjoy a movie with their family.”

Good. Have to give it a try. Now all we need is for the grand opening of the Westbury, the Sandy ravaged Long Beach and the Glen Cove negotiations and all will be back online.

Didn’t find any listing in the newspaper show times or on Fandango so drove by. It’s open as the Islip Cinemas. They don’t have a webpage but are on Facebook. Contrary to originally published reports prices are not super cheap. 2D is $7.50; 3D is $10.50. Lobby is gray with a white tray ceiling.

I WENT TO THIS THEATER IN THE “60’S” ONCE.I SAW A DOUBLE-FEATURE FRANK SINATRA in"ASSAULT ON A QUEEN",and DEAN MARTIN in MATT HELMS’s"MURDERS ROW",BOY DO I MISS DOUBLE FEATURES.