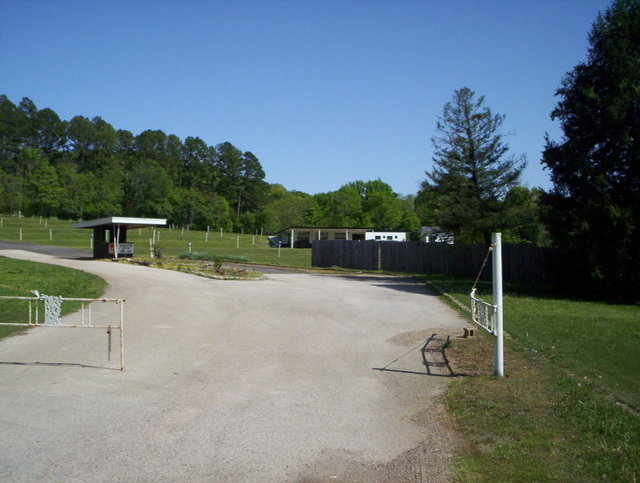 The rural setting and grass field, lushly bordered and framed with lots of trees, combining with the lingering presence of traditional drive-in speakers allows a sense of some where else in time. (Sound is also offered through FM radio) The Pine Hill Drive-In was in operation since 1953. They had a 300 car capacity and it was open seasonally, May through September. It showed one movie nightly on a weeks only operation. It was closed in 2015.

website Actually the Drive-In is located on MO Highway 34 and 339A.

Status should be closed. According to their Facebook page, they decided not to reopen because of extensive vandalism.

There’s a nice YouTube video of how the Pine Hill looked as of summer 2017. The land slopes nicely toward the screen, and it looks like someone could reopen it with just a smidgen of cleanup. And a digital projector. A Jan. 3, 2018 post on Facebook said, “Still have not sold!!! If you’re seriously interested in purchasing, message us.”

The 1955-56 Theatre Catalog listed the owner as A. B. Jefferis, capacity just 200. Its first appearance in the Motion Picture Almanacs was the 1957 edition, same owner, capacity 300. It stayed that way through 1966. Jefferis also owned the indoor theater in Piedmont.

The St. Louis Post-Dispatch reported on March 23, 1973 that one Mrs. Maude Jefferis of Piedmont photographed odd blinking lights “high above the drive-in movie screen that stands beyond a pond in Mrs. Jefferis’s front yard.” That must be the adjacent house east of the Pine Hill.

NeonMichael: It is nice of you to mention my grandparents, Alva “A.B.” and Maude Jefferis. They built the Pine Hill Drive In Theater (as well as the Jefferis Theater in town), and built the house that you list as adjacent. (The house, and property, are behind the back fence of the drive in.) Grandmother did photograph a number of strange (and strange-behaving) lights in the sky as seen over the theater’s screen (which put them in the direction of the sky over and past Clarke’s Mountain). Grandmother had the dam (which is topped by the driveway to the house) rebuilt in the 1980s. Granddad had a train (12" between the tracks, live steam) he named “the 4 Spot”. Before he died, the track was put around the pond between the house and drive in theater. That engine and the cars are now a part of a railroad club in Atchison, KS. My older brother is a part of that club, so we get to “keep an eye on Granddad’s train”. Grandmother was a teacher in town, as well as professional photographer in Piedmont. Wonderful people, now long gone but not forgotten.

Thanks for the note, NealJ.

As of a July 26 Facebook post, “The drive in is still up for grabs! Have had so many wonderful people interested, however for many different reasons it has fallen through.”

There’s a nice paragraph about the Pine Hill in the June 9, 1956 Motion Picture Herald, under the headline “Maude and Jeff’s Movie Chatter Is Always Okay”:

That’s mild comment, but it fits as a headline, as we’ve said it before in various ways. But Jeff Jefferis, and his helpmate, Maudie, put more human relations into their program copy than you find in bound volumes of other stuff. We have never yet visited the Pine Hill Drive-In at Piedmont, Mo., but we feel like an old friend, at this distance, so folks who really live there must be members of a big, happy family. One thing for sure – and that is that Maude and Jeff are always looking out for the family trade, and making them feel at home, which is the best way to get them out to the movies. He says, it seems as if he spends the best part of his life either writing this monthly chatter or addressing movie calendars by the bushel. And he says further – he doesn’t have to apologize for a single one of the attractions for June – there isn’t a single “dawg” on the entire list! Organ concerts are a regular feature, and he believes the Pine Hill is the only drive-in theatre in Missouri with a Hammond organ.

I’ll skip more homespun chatter, quoted in later issues of the Herald, and jump to the Sept. 28, 1957 issue of BoxOffice, where the classified Theatres For Sale ads included (apparently) the Pine Hill.

Is the Drive in Theater up for sale???

Pine Hill has been purchased and we plan to be open spring of 2022.