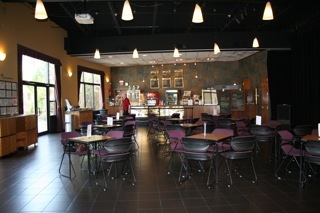 Culturally and politically, the cinema has been at or near the center of life on Long Island for all its thirty years. For the thousands of ageing hippies that haunt the highways and by-ways of Long Island’s suburban sprawl, the cinema provides a desperately-needed focus and a sense of belonging. Its co-founders are an obsessed, driven, universally-beloved couple named Vic Skolnick and Charlotte Sky, who started out with a small projector and a bedsheet tacked to the wall of a food co-op, advising audiences to bring cushions to sit on. They’ve miraculously managed to turn their funky non-profit operation into a huge, slick, prestigious and even rather glamorous enterprise, with Isabella Rosselini hosting gala benefit parties, without losing any of their original sense of mission and community. While first-run films bring in income, the other screens (and videos) feature African film festivals, leftist documentaries, and off-beat experiments by unknowns. Their son Dylan runs a cinema-within-a-cinema with his long-running series of horror flicks, ensuring that aging Generation-Xers are also part of the clientele.

The New Community Cinema occupied two or three other locations before convincing the town to let them into the present school building. An unsolicited million-dollar gift in 1990 allowed for renovation and expansion, at which point they started calling themselves the Cinema Arts Centre.

This place, the “New Community Cinema” when I lived on LI, should be one of the most highly praised theater venues in the NY area. Though the space was never luxurious, the films they showed were remarkable for their diversity. I miss this place so much since I moved out of the state.

I lived in New York City all of 14 months, before returning home to South Florida to start school. While in NYC, I devoured movies, seeing typically over a dozen a week. The only time I ever left the New York City area was to see Peter Greenaway’s ‘The Baby of MÃ¢con’ at the Cinema Arts Centre in Huntington.

I took the LIRR to Huntington and then a cab to the CAC, which is part of a larger facility for senior citizens. I felt, at all times, as though I were a guest at a seniors' resort, but that was ok. My anticipation of seeing the Greenaway film upstaged any craving for atmosphere.

The print of the film, which was made in the early ‘90s and never released in the US, was imported from France and being shown in a theater with a capacity for maybe 70 people. It felt more like a meeting room than a cinema (there are other, larger auditoriums) and I had to ask if indeed the film was being shown on 35mm.

The film began. The movie, set in 17th century France, stars Julia Ormond as a wicked virgin who claims her mother’s newborn infant as her own by virgin birth, chains her mother in the basement, and sells the baby’s blessings. Through a nasty turn of events, Ormond’s character is sentenced to die by the Church, but given that she’s a virgin, the church cannot execute her. So, they first seek to devirginize her by having her raped by 113 men.

The audience with which I sat was 97% elderly. The only other guy, aside from me, under 60 had to tell an elderly couple behind me to “shut the fuck up” for talking during the feature. Miraculously, nobody walked out during this rather harrowing film depicting some depraved things. In fact, a good 20% of the audience fell asleep.

The programming here, though, is absolutely excellent.

A very hip theater that has made its mark on longisland……..Never new it as anything other than New Community ….Thats what the local still call it…….Located in the old village green school in Huntington……….A must see for art film lovers………

I’m happy that this place is still around. I remember the “old days” when it was just a run down school auditorium. They do a good job with booking classics, neo-art films, and newly neglected ones (like David Lynch’s “Inland Empire”). ______HOWEVER, I have a problem with their bookings of so called “Cinema of the Wild”, and other “psychotronic” movies. Dylan (the owner’s son; and a very pleasant fellow), tends to over-shoot and under-shoot his bookings. Often the “Wild” titles are movies you are all too familiar with (“Blue Velvet”) or too-obscure Asian movies that, aren’t that are not “wild” at all. A recent “grind house” summer film festival featured “Streets of Fire” and “Xanadu” (!?). I was baffled and disappointed.

…they should actually have a REAL grind house night with some “roughies” like “Olga’s House of Shame” (a perfect example of a movie that EVERYONE has heard about—but few have actually seen it) or the Coffin Joe movies (from Brazil) that don’t get seen very much at all. Oh yeah; they should let you smoke in the theater as well; just like the old days!——————————-
**So if anyone at Cinema Arts is reading this NOW, please send Dylan this link and a nudge. Do a little more exploring into rarely seen BUT often noted movies.

Sethkino; I was in Joan Seman’s art class in high school. Have not seen her in years…

An article about the theater and its offerings: View link.

The folks at Cinema Arts are helping the fledgling Plaza Media and Arts Centre in Patchogue getting established.

Cool place, definitely has the arty vibe…saw Robot and Frank here on my way from Albany to party with an old college buddy in Northport

Please update, theatre is 488 seats and only has 3 screens.

My source is their websitehttps://cinemaartscentre.org/#sthash.i2RsXM8b.dpbs