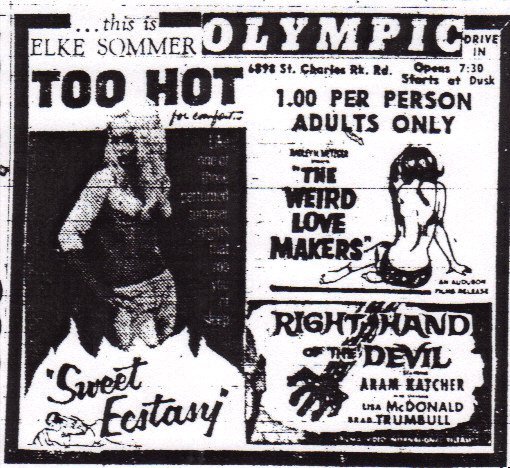 This drive-in opened July 3, 1962 as the Olympic Drive-In in Pagedale and had a 400 car capacity. It was soon screening ‘racy’ film fare and was renamed renamed Rock Road Drive-In on May 27, 1977 when Wehrenberg Theatres took it over. It eventually began running porn movies. They had to install a large screen around the drive-in and it was drapped in a black vinyl material so that the screen couldn’t be seen from the Rock Road. There were constant battles between the drive-in owners and the city of Pagedale over violations because of the films that were being run. They would make inspections of the facility and cite them for the least of irregularities.

It was closed in 1980 and is now a junk yard, but the large marquee with the giant Olympic torch facing the Rock Road survived until around 2017.

Facts on this drive-in need to be corrected. It opened as Olympic. Name changed to Rock Road when Wehrenberg took over in 1977 and it closed in 1980.

In addition to the battles with Pagedale, the U. S. Olympic Committee, in 1968 and again in 1974, notified the venue that the use of the name “Olympic” violated a 1950 federal law. Olympic was the drive-in’s name until it closed Nov. 30, 1976. When it reopened under Wehrenberg management in May 1977, it had become the Rock Road.

Listings in the Motion Picture Almanac give a capacity of 865 cars.

Even more update… The marquee no longer there

From the Oct. 20, 1965 Motion Picture Exhibitor: “The Olympic Drive-In on St. Charles Rock Road in the County has been the target of frequent raids by police and of a newly formed decent films committee in an attempt to close the theatre for allegedly showing obscene films.”

Added an ad for the grand opening of the Drive In as Rock Road Drive-In on May 27, 1977

Boxoffice, July 13, 1970: “The Pagedale Board of Aldermen again turned down an application for an operators' license by the Olympic Drive-In. According to City Atty. Paul J. Boll, the theatre has operated without a license for several years.”