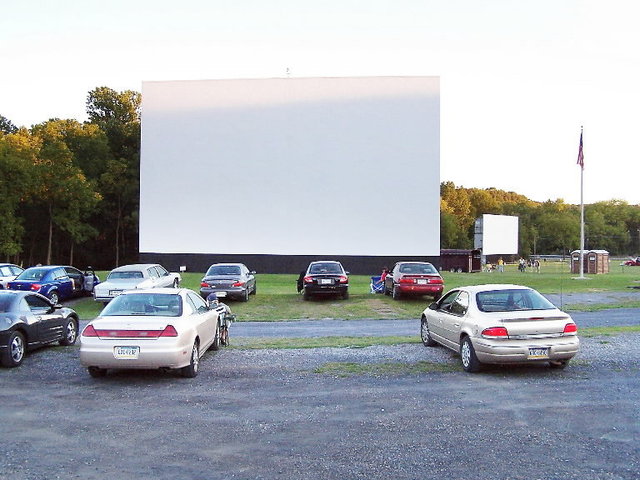 I’ve never been here but I have driven past it several times and it does set you back to the 1950’s. The Route 45 Drive-In opened in it’s present location on June 2, 1946 with Roy Rogers in “Utah”. It is in the middle of nowhere but it’s in pretty good shape. Check it out. They play either first or second run movies. It was renamed Becky’s Drive-In in 1971.

A great week end was had by all on Sat. as Beckys celebrated the 76th anniv. of Mr. Hollingshead great invention of the Drive-In!!
Close to a sell out at both screens, a wonderful evening with
Great food (as attested by the 70+ folks in line at both snack bars!)a DJ spinning good tunes, pony rides and attractions for the kids and fire works betweens movies. This is why we must support these dying icons of our country! I make this 70 mile trip from NJ frequently during the summer on my drive-in road trips (5 in Pa.!!)
This is a definite stop for any theatre/DI fan.

Billboard magazine was late in noticing the drive-in, writing in a July 17, 1948 roundup, “Others recently opened are … the Route 45 Drive-In at Berlinsville, under Beck operation”.

In the May 19, 1951 issue, the Philadelphia-based Allied Motion Picture Theater Service announced it had added the Route 45 (among others) as a booking client. In the April 19, 1952 issue, Route 45 owner William D. Beck announced he was doing his own booking. Then on April 23, 1955, another Philadelphia company, Tri-State Buying & Booking Service, started “handling” the Route 45.

A commenter on Retro Roadmap wrote that the drive-in showed X-rated movies in the 1970s and early 80s. Still “even though it was an adult theater it had the number one rated snackbar”.

The Allentown Morning Call wrote in October 1982 that neighbors weren’t bothered that Becky’s was showing X-rated movies. William Beck’s son Dennis had purchased the drive-in “at the beginning of the year.”

That article also said that in 1939, Beck “opened his own drive-in in Berlinsville and charged an admission of 25 cents per car. … In 1945, Becky expanded again on another site, and two years later he installed in-car speakers.”

In an undated article at the Lehigh Valley Marketplace, it said that Beck “opened the Route 45 Drive-in on leased property; in 1946, he bought the land where his namesake theater now stands.” Which explains why he moved a block away.

The Blue Mountain Town & Country Gazette wrote in July 2014 that when the Route 45 opened, it had two loudspeakers for the whole viewing field. “Around 1981, he put in the radio transmitters in AM, so people couldn’t steal or damage the speakers,” said Beck’s son Darrell. “Then it went to FM and it’s done that way still today.” It also said the drive-in changed its name when the highway number changed in 1971.

Around 1971, Beck switched to adult movies “for survival” according to later generations. “People would snicker, but we had to do that or there would be a store here now,” co-owner Cindy Beck Deppe told The Morning Call in September 1997. William Beck died in 1987, and the following year his widow and children switched back to family films.

The Morning Call declined to advertise X-rated movies, which makes it difficult to determine exactly when the drive-in changed its name. A Sept. 1972 article about a traffic accident still called it the Route 45. A slate of kid-friendly movies was advertised for Becky’s on Memorial Day Weekend 1975.

I found what appears to be the actual grand opening date of June 2, 1946. The ad is now in the Photos section

The BECK family owns it.