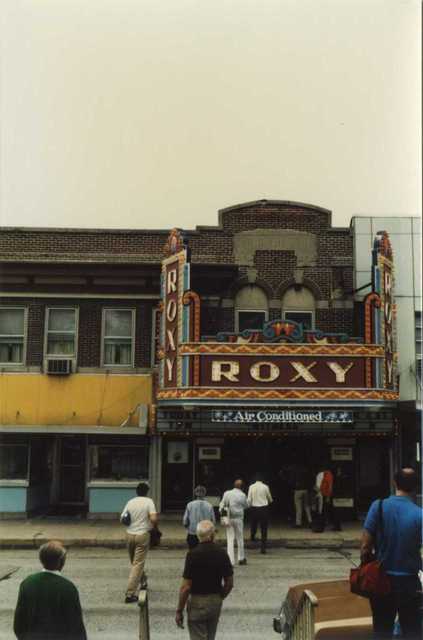 Built in 1921, as the Lyric Theatre, the theatre was created by Northampton’s Harry Hartman (an owner of several area nickelodeons) to provide more seating and stage area for local vaudeville performances. It was designed by architect E. Biting.

Hit hard by the Depression, Hartman sold the theatre in 1933 to Clark and Greenberg Theatres of Philadelphia. They closed the theatre and completely renovated it in the popular Art Deco style. Prominent Philadelphia theatre architect David Supowitz was hired to design the new look, which included reducing the seating capacity to 650. The theatre reopened on August 31, 1933 completely transformed, with a new name…the Roxy Theatre.

In the early-1960’s, after a decade of fierce competition with television, Clark and Greenberg gave up their lease to new management. By June 1, 1970 when the theatre was acquired by Angstadt and Wolfe Theatres, it was only a shadow of its former glory. A&W began a slow and long drawn-out restoration of the theatre that still continues to this day.

In 1988, A&W partner Richard C. Wolfe acquired complete control and ownership of the theatre. Wolfe renovated the lobby, restored the exterior to its original appearance, and added new seating and carpeting. A Wurlitzer 2 manual, 6 ranks organ was installed in 1995.

In addition to live entertainment, the theatre continues to operate as Northampton’s only commercial movie theater.

Ok, that works. Thanks!

Lehigh Valley PBS Channel 39 has recently done a piece about the Roxy Theatre on their program FOCUS. The portion about the theatre starts at the 14 minute mark. https://www.youtube.com/watch?v=ai9pCK8BDRs&index=3&list=PLeb-wypQkl_-lbLde5-Fx9mPhp_xAs-cm

The entire Allen organ (including all 36 of its speakers)removed from the State Theatre in Easton Pennsylvania has now been installed at the Roxy in Northampton Pennsylvania. The sound is incredible! The prior organ and all of its piping was removed. The stage has also been widened to allow more live performances.

I had the pleasure of attending the Roxy on two different occasions. This is the type of theatre most of us would love to own. Its beautiful marquee, lovely auditorium and gregarious owner create a movie going experience from a by-gone era. The Friday night I attended there were about 150 patrons in attendance. When patrons left, they thanked the owner and why not– they got to see a good movie, a cartoon, and movie short all for a reasonable price. Refreshments are also priced reasonably. Sorry to hear about the organ. When I was there the owner was undecided about whether to restore it or not.

Hi Muviebuf, I’m not sure I’m reading your comment correctly. Is the organ operating or was ir rmoved.

The prior organ and its chambers were removed to make room for the installation of the Allen organ from the State in Eastson. That Allen organ has been installed and is now in use at the Roxy.

I believe the owner of the Roxy is applying for the federal Covid grant program for performance venues, museums and independent theatres.

Good News. The Roxy did receive funds from the federal Covid grant program thus assuring its continued survival at least for awhile. A portion of those funds were just used to redo the surface of its stage flooring - just in time for the local Nutcracker ballet performance last weekend.