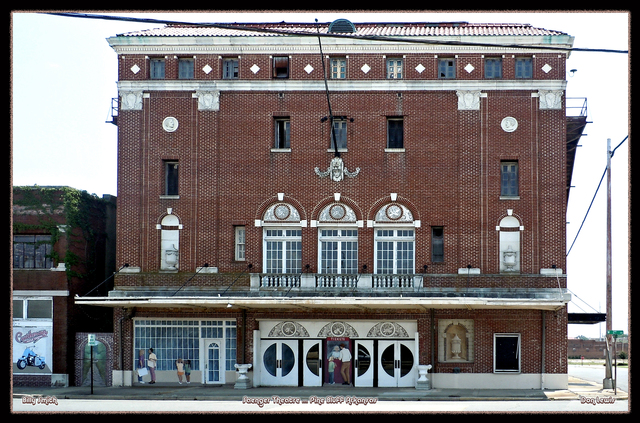 Opened on November 17, 1924, the Saenger Theatre in Pine Bluff could seat 1,500. It was designed by Emile Weil. The Saenger Theatre operated as a movie theater into the 1970’s, and then hosted both live entertainment and classic movie screenings.

It will re-open as theatre as planned……

First Movie will be “The MOON strikes back, the negroids take revenge”

I say that in humor and to prove a point: MOON himself boasted of his pride to be able to buy the places that enforced segregation by law. So now he is the HNIC. The more you buy the more control you have. Now lets see him donate some property for charities sake.

The 2nd link I posted says Hauber sold to Bohlinger Amusements in 1920, then 2 months later sold to Saenger. So it appears to already have been Saenger when it burned in 1922. Very possible a 1922 building on the same lot, but it doesn’t mentioned the building was razed.

Take the 2 links I posted and it shows that the Hauber became Saenger sometime late in 1920. Burned in 1922, when Hauber no longer owned it, and was rebuilt by Saenger. Granted, it doesn’t say where or how much it was rebuilt. Since the rebuilding had an architect Emile Weil, I am going to assume from the ground up.

Cost for rebuild was estimated at $30,000 before the fire, then was finally rebuilt after the fire at a cost of $200,000. From reading the articles, it burned while in the process of rebuilding or remodeling.

I was in Pine Bluff last February and I was blown away by the ghost-town it had become. I remember seeing movies in the Saenger and it was just an amazing place! I’m a photographer and I planned to capture the historic buildings as they stood against time….when I saw them, I found myself hoping to document their existence before they’re gone—which, given what I saw, is not far in the future. I was never there when the Hotel Pines was open but I have always been drawn to it—I remember stretching and straining to look through the boarded up/dirty windows just hoping to see what was inside. While I was there, I was allowed into the Hotel and I wanted to bawl! I shot several photos of it just to have some record of its existence. It is so sad that these places are being left to decay and be demolished because they don’t fit into our “Wal Mart and strip mall” world today.

I’ve tried to contact the owners of these old buildings to no avail. It really bothers me that they’ve become pawns in some petty “pissin' contest” between two immature ex-school rivals! How pathetic! They need to pull theirs heads out…….and realize there’s not just a “big” picture here, there’s a HUGE picture. They’re not playing Monopoly—they’re playing with history and, if they cause these places to be lost forever, history will NOT be kind to them when their stories are told in the future. I’d like to try to help save these places (and some others around Arkansas) so, any ideas………….

The person who is mentioned here, Moon, NEVER bought the theater. Ever. It is still owned by Old Town Theatres Centre, Inc., a 501 c 3 corporation who are doing every thing they can to try and raise money to begin at the very least much needed repairs. Moon was indeed interested in getting ahold of the theater, but he never did – not even for a single day.

We are trying to Save the Saenger in Pine Bluff, Ar. Please go to Save Saenger on Facebook and perhaps donate to the cause..

My family all worked at the Saenger, Malco, and Strand..my Dad was manager of the Zebra Drive In for several years. I worked during my high school years (1964-1968). It is hard to believe there was still what was called a “colored” entrance during those years….at the Saenger and the Malco. My Mom sold tickets at the Strand until is closed down. My brother was a projector operator (in the 1950’s) and I did tickets, concession and ocassionally, doorman. The Saturday morning “Coke” shows were fun! The doors opened with swarms of kids rushing in. The Manager at the time was Bruce K. Young. We had an awesome time before and after shifts exploring the beautiful Saenger!

I forgot to say these theaters were in Pine Bluff, Arkansas.