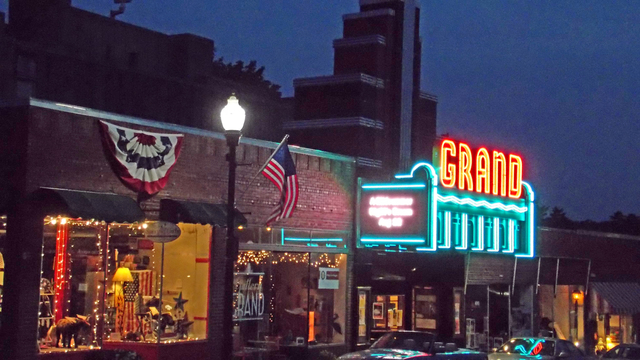 The Grand Theatre was opened in 1938 with a combination of Art Deco and Streamline Moderne. It run successfully until 1950 when it closed. It re-opened for a few years in the late-1960’s and was used for boxing events.

It was scheduled for demolition in 1974 but the community came together and it was restored. It was re-opened in 1975 as a performing arts center. It now presents a mixture of movies and live performances.

It has its fully restored marquee and free standing box office in operation with all its vivid color.

Anoher photo, a bit further back to put the location in perspective:
View link

Here is another photo:
http://tinyurl.com/2ft62wa

I sometimes find that to be true too, Simon, and more than a tad annoying; on the other hand, so many photo links on these comment pages are dead, so perhaps some redundancy helps assure that one will survive.

From the 1950s a postcard view of Main Street and the Grand Theatre in Ellsworth.

The Grand’s official web site says the theater was designed by Boston architects Krokyn & Browne. Most sources, including Cinema Treasures, call the firm Krokyn, Browne & Rosenstein, but Rosenstein isn’t mentioned on the Grand’s web site. Rosenstein appears to have been the youngest of the three, and perhaps he had not yet become a partner at the time the Grand was designed.

I’ve found a bit about J. Frederick Krokyn, less about Arthur Rosenstein, but W. Chester Browne joined the advisory board of Boxoffice Magazine’s Modern Theatre Planning Institute in 1948. He had been associated with Krokyn from 1936 to 1941, thereafter establishing his own practice. The January 31, 1948, Boxoffice item about Browne said that Krokyn & Browne (Boxoffice doesn’t mention Rosenstein either) had during that period done all the work for M&P Theatres and Graphic Theatres, as well as designs for many independent operators.