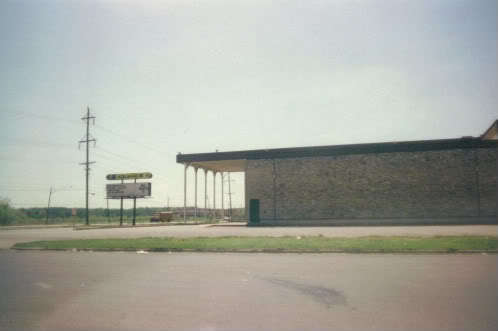 The Aquarius Theatres IV was opened May 31, 1973 by Trans-Texas Theatres. The theatre featured a large lobby and concession area. The exterior of the building was done in a light brick with a large drive under canopy. The auditoriums featured curtains on traverse to open and close before and after each movie. The 700-seat screen 1 opened with “Fiddler on the Roof”. The 500-seat screen 2 opened with “The Legend of Boggy Creek”. Screens 3 & 5 each had 250 seats and opened with “Ace Ellie” & “Roger of the Skies”. Each auditorium had its own color scheme.

The theatre closed in 1996 and was used as somewhat of a mini-mall named El Gran Mercado. Auditorium 4 was a Mexican restaurant. It was demolished in 2016.

I worked as a projectionist at the Aquarius in 1980 and 1981 while I went to school at the University of Texas. It was a first-run AMC theater then. It was not in the best part of town, and the theater had ushers posted in the parking lot at night to make sure that people didn’t have their car broken into. There was also an armed robbery at the box office.

I’ll never forget one weekend, when Austin was having huge floods and rain. The water was approaching the theater, but only cut off one road leading to the theater. A lot of people had to evacuate their homes, so they spent all day at the theater. We sold out just about every show.

I saw “Sleepwalkers” there for a dollar in 1992-1993 so it was open at least that long. I remember the very high ceilings with ceiling fans, and sticky carpet…

Remember it in first run…it always had such a dated look even by the early 80s. I remember a lot of brown and yellow permeating the design. This was in the first wave of lets clean up Riverside and give students who live over there something to do. The theater outlasted everything else. I remember when it went discount it had the movie Friday for what seemed like 2 years.

I agree with Jr, Friday did play there for at least 2 years. I’ve always wondered who did the artwork for the giant Aquarius kneeling Mural that was inside the lobby. I love this place I didn’t care if it was a little run down it was somewhere to go and it always felt like the movie was playing just for me, I also really like the two theaters in the back they were huge. it hurts me now to see what it has become but at least I see it still standing and it feels like a piece of me is still standing in the Riverside area. I promise if I were to ever come into some kind of big money I will re-open it as what it’s supposed to be. I recently visited the old putt putt golf course that was next to it. The Huge T Rex is still standing Humpty Dumpty is still sitting on the wall. sadly I was too young to play there as a young child in the early 80’s before it closed down. Anyone remember Games Galaxy?

This is now the hottest new up and coming area and perfect for an entrepreneur to buy this gorgeous theater and return it to its glory on Lady Bird lake. With the parking space to make it a destination for art film on the east side of south Austin

It was bought multiple times in the past 2 years. It currently sits vacant, and is going to be demolished within the next 60-90 days.

Hell yes I remember Games Galaxy! Late night on weekends and the stench of cigarette smoke while you played games on that technicolor blue carpet with all the funky patterns on it. By the way, I miss SportsPark- the Victorian building housing a two-story arcade and mini-golf, batting cages, and lastly a roller skating rink that eventually ended up a blazing inferno of fire one night. I always wanted to sneak back there and steal some of those cement fairy tale figures and rehab them for display in my yard, except I never had a yard to put them in. One day when I’m wealthy…

Oh yeah, and I saw Star Trek II: The Wrath of Khan, The Thing, and Galaxy of Terror at the Aquarius IV. I loved this theater.

Grand opening ad in the photo section and below 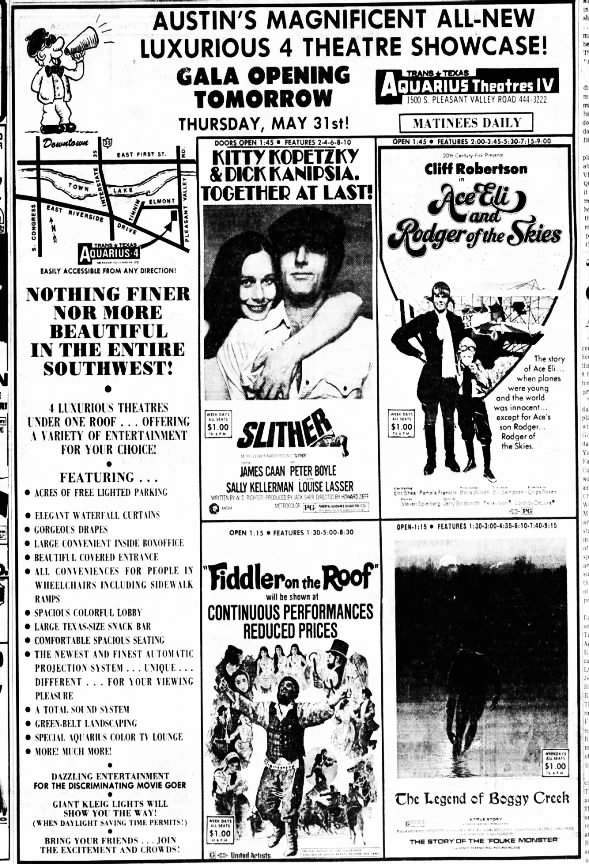 An enormous apartment complex has been built on the site of the Aquarius Theatres IV. For the time being Google’s satellite views still show the theater if you zoom in, but they probably won’t last long.