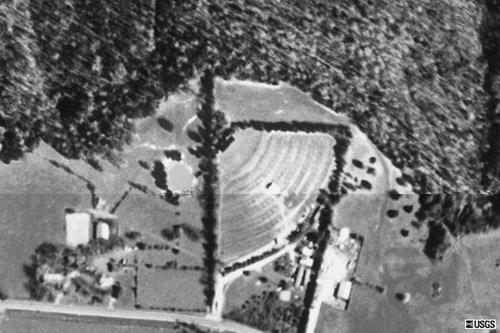 The Stone Drive-In, one of only a couple of drive-ins still operating in Arkansas, opened in 1965, then, as now, a single-screener. The theater can accomodate about 300 cars, and its season runs from March to October.

From a 2003 CNN Money article: “It began when (owner Bobby) Tompson’s father came home one day with a used Ford truck, small popcorn machine and two movie projectors. He drove the Ford throughout Arkansas, stopping in towns to sell tickets to films that he projected on the sides of churches and school buildings.

“Eventually, Tompson’s dad erected a permanent giant movie screen in a field near their home, installed speaker stands, a tiny ticket booth and concession stand. Tompson took over after his father’s death, and he still runs the movies during summer nights.”

wonder where they tell you what wovies they show?

here’s the rusted all covered remains of the marquee