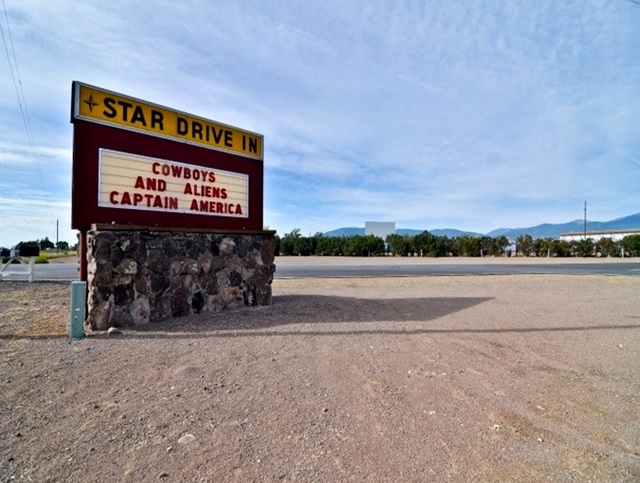 The Star Drive-In opened on July 1, 1955 with Ward Bond in “Gypsy Colt”. It had a 300 car capacity. In 1964, it was unique in that there was a 14 room motel added in the backfield of the drive-in, and was called the Best Western Movie Manor. You can get a room at the motel and open the curtains over the picture window and view the movies. It has since added another 200 car screen in 2003. Sound is provided over FM radio. The drive-in is open seasonally from May through September.

Here’s a recent postcard from my collection:
View link

The Star Drive-In actually opened in 1955, and was operated by George and Edna Kelloff, who later reopened the old Granada Theatre in Monte Vista as the Vali Theatre. The opening was announced in the July 9, 1955, issue of Boxoffice Magazine. It was a single-screen operation accommodating 300 cars.

According to this web page, George Kelloff is still the operator of the Best Western Movie Manor Motel.

The 2005 book “The Big Book of Car Culture: The Armchair Guide to Automotive Americana” by Jim Hinckley and Jon G. Robinson limited preview available at Google Books has a section about Kelloff, and says that he started the Movie Manor Motor Inn project in 1964. There’s an aerial photo of the drive-in, but it shows only one screen, not two, so it must date from before 2003.

This drive-in was also a fly-in, as it had its own landing strip in the 1960s.

The Movie Manor is a treasure, and its setting is unique, but it was never the only motel-drive-in combo. The Fairlee Motel & Drive-In Theater in Vermont started adding its motel rooms in 1960, and it’s still in operation.

A current article on this somewhat unique drive-in:

Probably between the opening of the Star and the building of the Movie Manor is this note from the April 23, 1962 issue of BoxOffice: “George Kelloff has completed construction of his new home which was erected on the grounds of the Star Drive-In, Monte Vista.”

The Star held its Grand Opening on Friday, July 1, 1955, based on a front-page story in that day’s Monte Vista Journal. It was owned and managed by Mr. and Mrs. George Kelloff, “who are moving to Monte Vista and will occupy an apartment at the theatre site.” The opening program was “Gypsy Colt” and a cartoon carnival. The drive-in held 500 cars and had been built “on the old airport site.”