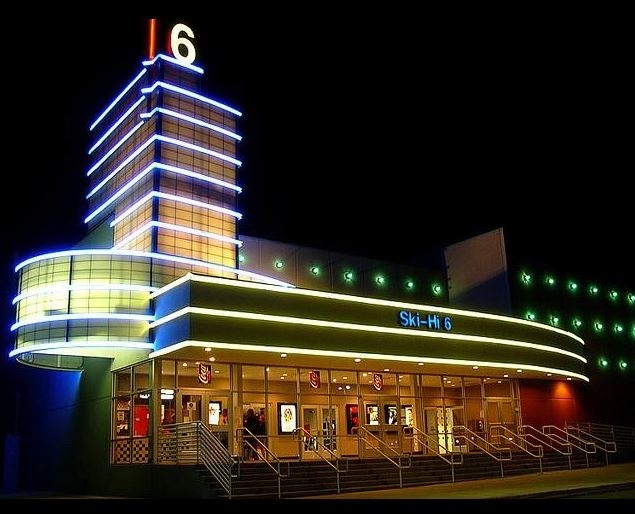 The Ski-Hi Six Theater opened in 1997, replacing the town of Alamosa’s two indoor theaters and one drive-in, the Grove Theater, the Rialto Theater (both on Main Street) and the Ski-Hi Drive-In. These three theaters were owned by Fran Eigenberg, owner of Murphy Theaters which has been in Alamosa since 1941 and owns and operates the new Ski-Hi Six. Murphy Theaters was founded by Fran’s parents, Tom and Mabel Murphy which was founded in Raton, NM.

The Ski-Hi Six was constructed on the site of the old Ski-Hi Drive-In at a cost of $2.3 million. The auditoriums seat anywhere 104 to 283 people. The theater was constructed by Gearcon General Contractors of Albuquerque, NM.
I have visited this theater and it is very beautiful, inside and out, clean and well operated. I saw "Amityville Horror" and "Guess Who’s Coming To Dinner on two different occasions in April of 2005.

It is the only multiplex I have ever been to that has that mom and pop feel one might encounter in a single screen theater.

This theatre is listed in the “Career Achievements” section of a web page about architect Linda Bernauer, an associate of HOK Architects.