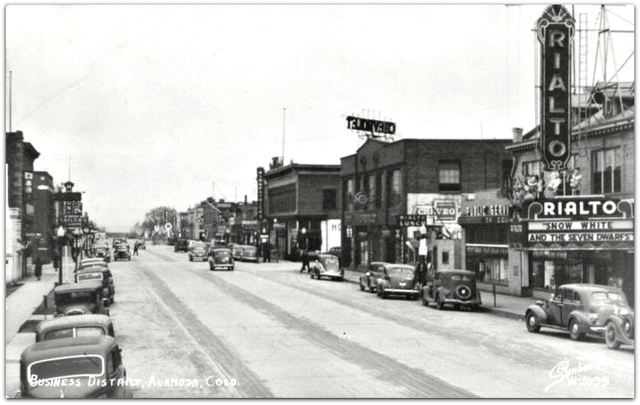 The Rialto Theatre opened in 1925 on Main Street near San Juan Avenue originally as an American Legion Hall. Within two years, it became a movie house seating around 1,000 which also featured live entertainment. (By the 1940’s, seating had been reduced to a little over 500). In July 1969 it reopened following a refurbishment in which the interior had been gutted.

From the 1940s a photo postcard view of the Rialto in Alamosa.

Seated 572 according to Film Daily Yearbook of 1942

The Dickey-Springer American Legion Post No. 113 was built in 1925 and was also the Rialto Theater. U.S. Vice-President Charles G. Dawes came to Alamosa to lay the cornerstone. Two years later, the building was leased and eventually sold to former Mayor Everett Cole, who elaborately refurbished the interior, complete with a crystal chandelier. Cole added the Rialto’s landmark neon sign in the 1930s. It became a movie house seating around 1000 which also featured live entertainment. By the 1940’s, seating had been reduced to a little over 500. An ornate $15,000 Wurlitzer pipe organ was built especially for the theater and used during silent films. Into the 1970s, the theater manager Joe Brite played the organ at the movies. Brite was robbed and beaten severely at the theater in September 1974 and died several days later. Robert Andrew Lucero lll, 17, pled guilty to a reduced charge of second degree murder of Mr. Brite. He was originally charged with first degree murder and had pled not guilty by reason of insanity. There was a court change of venue to La Junta from Alamosa.

Boxoffice, Aug. 4, 1969: “ALAMOSA, COLO. – The Rialto Theatre here has been reopened by McKenna Theatres of Raton, N.M., under lease from the Thomas F. Murphy Trust, after a six-week remodeling and redecorating program which saw the building completely gutted and rebuilt … For many years, the Rialto was personally supervised by the late Thomas F. Murphy, who had planned for several years to remodel the house. After his death a year ago, Mrs. Mabel Murphy, his wife, carried out his plans.”