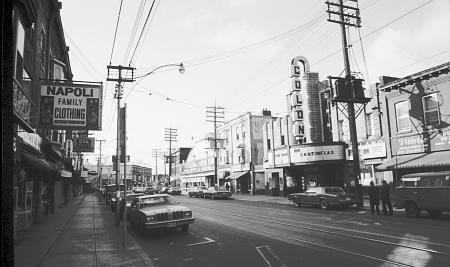 This restored theatre was known as the Pylon Theatre when it opened in 1939 in Toronto’s Little Italy section.

Three longtime repertory cinema houses â€" the Revue, the Royal and the Kingsway â€" are slated to close by the end of June.

The theatres â€" part of the Festival Cinemas group â€" were owned by cinema entrepreneur Peter McQuillan, who died in October 2004.

Last night, his son Mark told the Star that he and his two siblings made the decision to close the theatres reluctantly.

“The heart and soul was my father. Since (his death), we have been trying our best to run (the business).

``But we don’t have the time, the energy and the financial wherewithal to keep it going,“ said McQuillan, noting difficult market conditions contributed to their decision.

“I feel bad if they are closing. We might get a few more customers but I don’t know what it says for the industry,” said Carmelo Bordonaro, owner of the Bloor Cinema.

“It’s a labour of love, these cinemas, believe me â€” a lot of hard work,“ Bordonaro said.

Bordonaro, a one-time partner with Peter McQuillan, said he was a “great guy.”

“He loved film, he loved cinemas and he really supported the film industry in a lot of ways. He was an amazing guy. I miss him all the time,” Bordonaro said.

Bordonaro said the entire movie industry is experiencing dramatic changes, with new films being downloaded from the Internet, DVDs being released in a shorter time period following a new film’s release at major theatres, and DVDs also being sold at big discounts.

All those factors and others are making it increasingly difficult for repertory theatres to compete and survive, he said.

Two rumors are circulating about the sale of the Royal.
1. The theatre has been bought by a successful nightclub owner. It
will be turned into a nightclub and eventually condo’s

Let’s hope the second rumor is true. Asking price was $2.7 million and it sold for 2.3 million cdn. You’ve got to sell lots of popcorn to recoup this type of investment. The Festival Theatres will be missed by many Torontotonians.

Has the Royal cinema reopened for business?. Does anyone know any information of what is to become of the Revue, Kingsway cinemas.

One of Toronto’s late, lamented revue cinemas reopens on Friday after a makeover.

The Royal Cinema, one of four neighbourhood repertory theatres that shut earlier this year after the death of the owner, has been taken over by Theatre D Digital.

The company plans to do post-production film work in four editing suites during the day and show movies in the evenings and on weekend afternoons.

The central Toronto cinema reopens to the public Friday with a screening of Canadian film Monkey Warfare, about two former revolutionaries whose lives are thrown out of kilter by the arrival of an attractive young would-be urban guerrilla.

Director Reg Harkema and actors Don McKeller and Nadia Litz are scheduled to introduce the film and answer questions after the screening.

Theatre D, which also owns the Regent cinema in Toronto, has equipped the Royal to show high definition and 35-millimetre film and installed a state-of-the-art sound system.

The plan is to restore the old charm of the original 1939 theatre, including upgrading seating, Theatre D spokeswoman Sarah Etherden said in an interview with CBC.ca.

The public programming at the Royal is still being worked out, said programming director Stacey Donen.

Canadian films, international films and some titles not in wide release will be shown, with local filmmakers invited occasionally to speak about their work.

The cinema will show shorts and participate in small film festivals.

The stage of the Royal also can be used for readings and music performances.

For now, entry to the cinema will cost $10 for adults and $7 for students and seniors, a little less than regular theatres, but the Royal may introduce a membership system next year.

Perhaps this is the Cinema I’m looking for, checked out the map to see if it would be withing walking distance from where I lived. would anyone know the history around 1970-1975 of this cinema. I see that some of the cinemas have behind them for instances “second run”. If I’m not mistaken this cinema was not only a second run type of movie house but also black and whites.

Thank you Lost for that pic.

This theatre was built in 1939 by Mrs. Joshua Smith, a movie doyenne of Toronto, who was a Shakesperian actress, poet, film distributor and trade newspaper editor. This theatre was a partnership of B & F Theatres, an associated circuit of the Famous Players Canadian Corp. In the lobby of this theatre under carpet or whatever are footprints of some British movie stars that she was friends with!