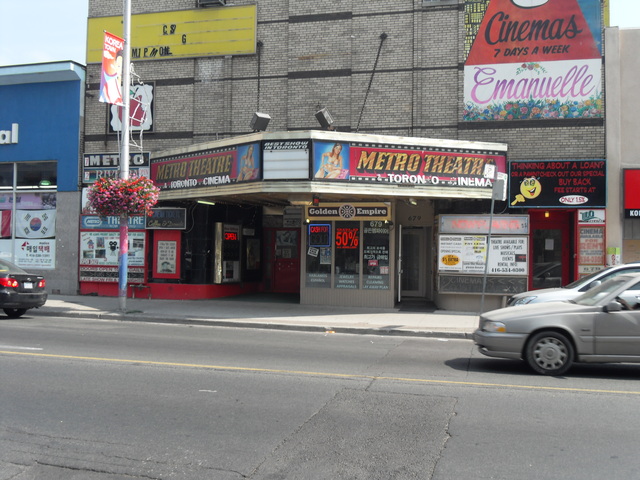 The Metro Theatre was opened by 1941. It operated for many years as an adult movie theatre. It was closed in December 2013.

There is a history page indicating that it opened in 1939; the website suggests that although it still has an adult-theater emphasis, it is also marketing itself to some extent as mixed-use venue.

The website for the new incarnation of the theatre is located here: http://www.projectionbooth.ca/#!PB%20Metro%20Home/cee5

Another article on the revamped theatre, which is now scheduled to re-open on Aug. 24/12: http://tinyurl.com/crqscjd

30 Sept. 2013 Hi; I’ve always been interested in visiting the Metro Theatre, 667 Bloor Street West, Toronto.
My Wife & I would really appreciate someone/some ones contacting us to tell us all about the Theatre (Best times to go, about the different screenings, about the different audiences etc etc) My best contact is my email address: Thanks:

Looks like the curtain has finally come down for the Metro:

Article on the Metro’s sale and the plans the new owner has for the site:

Hi, any old friend who visited there some times, want to contact old friends ? Please contact me at