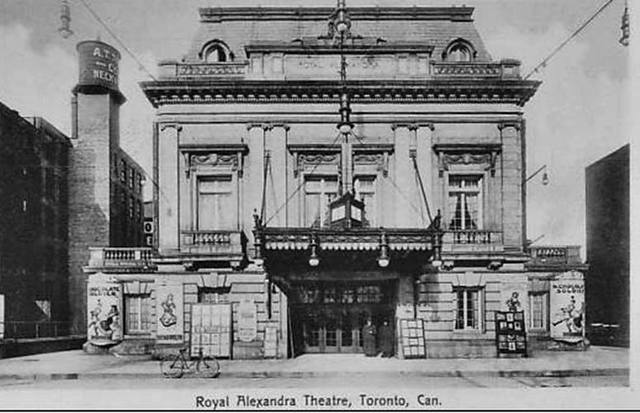 This beautiful legit theater opened on August 26, 1907 and closed in 1962, after several decades of successful operation.

Ed Mirvish saved the theater in 1963 and has since restored it. The theater has briefly been used to show movies.

The architect was John Lyle, who also designed the great Toronto Union Station. The theatre was built for Cawthra Mulock and opened on August 26, 1907. It originally had 1525 seats. (This info is from THSA Marquee Magazine, 1994.) Around 1990, Ed Mirvish published a book about the theatre which was unique: it had 2 front covers and also featured the Old Vic Theatre in London. After reading the first half of the book, one turned it over and upside-down to read the second half !

Ed Mirvish, who purchased the Royal Alexandra theatre in 1962 thus saving it from demolition, passed away this week at age 92. His contributions to the arts and entertainment in Toronto will be sadly missed.

Ed Mirvish not only saved the Royal Alexandra, but also the historic Old Vic Theatre in London. And he built a large new theatre, to traditional designs, just steps away from the Royal Alexandra. He was a very accomplished man, “A do-er, not a dreamer”.

That “new” theatre is the Princess of Wales theatre. The Mirvishes, under the corporate banner of Mirvish Productions, also operates the historic Pantages theatre in downtown Toronto (now renamed the Canon theatre after it’s current sponsor). Ed Mirvish is probably best known for his bargain emporium “Honest Ed’s” with it’s corny sayings plastered all over both the interior and exterior of the building. It was the success of that enterprise which eventually allowed him to pursue his theatrical interests beginning with the Royal Alex.