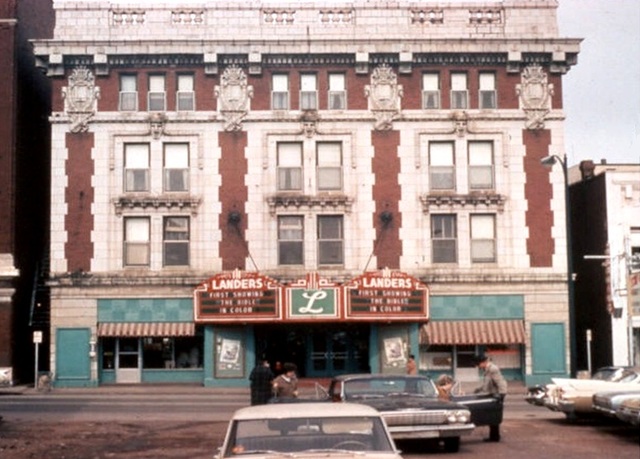 The Landers Theatre opened on September 18, 1909, with a stage production of “Golden Girl”. It was designed by architect Carl Boller of the Boller Brothers architectural firm. It was soon operating as the Landers Orpheum Theatre offering Orpheum vaudeville and quality live shows. The front facade is done in brick and terra cotta.

In 1915, movies were added to the vaudeville programme when D.W. Griffith’s “Birth of a Nation” was screened. It suffered a major fire on December 17, 1920. It was renovated to the plans of Robert Boller and reopened in 1921. Equipped for sound in 1927, it was the 35th facility in the world to play talkies, the first talkie movie to play at the theatre was “The Jazz Singer”. During the 1940’s, the Landers Theatre was operated by Fox Midwest Amusement Corp. and it operated as a first run movie theatre until the late-1960’s. For a while in summer of 1961 it was also the home for a NBC national TV show titled “Five Star Jubilee”.

The Springfield Little Theatre purchased the Landers Theatre in 1970. Major renovations were done to the theatre in 1985 and 1988.

The Landers Theatre was placed on the National Register of Historical Places in 1977. The Landers/Orpheum Theatre was decorated in a Baroque/French Renaissance style. It is one of the oldest theatre operations in the state of Missouri.

Here is a photo and some additional information for the Landers:
http://tinyurl.com/pjt5o

Is this the same theatre as the LANDERS 400?

Here is a postcard, circa 1910, from the Missouri State Library:
http://tinyurl.com/2t846a

The Landers Theatre was the home to the NBC color television series “Five Star Jubilee” during the summer of 1961, not 1959

For Michael Coate-
Yes, the Springfield Little Theatre was called the Landers 400 when it was a movie theatre. The reason for the name— the downstairs orchestra section had 400 seats. The two balconies were closed off during the “400 years” Later, when Springfield Little Theatre bought the building to house their stage productions, the balconies were reopened after the building had been refurbished. Sorry, this reply is two years late but I just discovered this site!

Forgot to add— in the 50’s and early 60’s ( before it became the 400) the Landers was simply known as the Landers and was a second run theatre.

Attractive facade which still maintains its original appearance. I hope someone can post a photo of the auditorium.

Nice period photos of Landers can be seen here –

This web page from the Springfield-Greene County Library, says that the Landers Theatre opened on September 18, 1909 (our introduction currently says 1890 for some reason.)

The Landers Theatre suffered a major fire on December 17, 1920, and was not reopened until 1922. David and Noelle’s list of known Boller Brothers theaters lists the Landers Theatre as both a 1909 and 1921 project, so Robert Boller, who took over the Kansas City office when Carl moved to California around 1920, should also be credited as architect, as he probably did the plans for the rebuilding.

Although the official web site’s main page is captioned Springfield Little Theatre, the site uses the name Landers Theatre throughout, including in the company’s mission statement which says:

“Springfield Little Theatre is a volunteer driven organization, energized by the highest artistic ideals, that strives to entertain, educate and involve the community in live productions and in the preservation of the historic Landers Theatre.”

It appears that they still call the theater itself by its original name, while Springfield Little Theatre is only the name of the organization.

Theater ran all night movies on Saturday in early 60’s. Spent most of a night there while on week end pass from Fort Leonard Wood along with buddies…It was a cheap way for GI’s to bar hop and crash over night, hop on a bus Sunday and return to post. I recall it as being a really neat and somewhat ornate theater..Good times in Springfield!