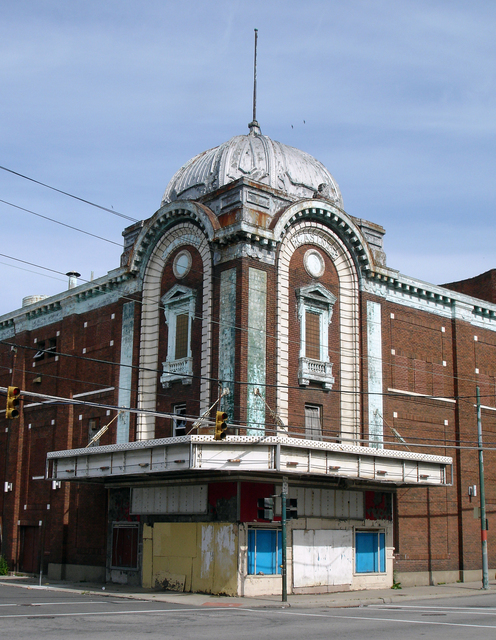 The Casino Theater is located two blocks away from the Metropolitan/State Theater, which was designed by the same architectural firm. The Casino Theater was opened in 1914. It had been renamed Regal Theater by 1941. It was tripled in October 1991 and renamed Regal I, II, III. It was closed on January 2, 1994. The building sits vacant & unused in 2019.

Casino Theater was the original name of this venue when it opened in 1913 and later became the Rialto Th. It was designed by local Cincinnati architects Rapp,Zettle,and Rapp.One can still see the Casino name inscribed at the top of its entrance tower.

Does anyone have any interior pictures of the Regal (Casino) Theatre?

I take it that Mr. Edwards' renovation efforts were not successful.

The Regal Th. was two blocks away from the Metropolitan Th. (not Majestic Th.) which later was re-named The State Th. and finally Allision’s West-End Th. Today the original Metropolitan Th. is the home of the Lighthouse Church.

Unfortunately Cincinnati is full of residents- former and current- who have good intentions but limited capabilities. Add Chris Randolph and Dixon Edwards up to this uninspiring list. From the old Hudepohl building to the Crosley factory plenty of people are sitting on buildings and stopping the future improvement of our community. I would like to request that Mr Edwards and his company- CASINO THEATER CINCINNATI LLC- hand this property over to someone capable of improving it.

MPFAFF doing a documentary of the West End do you have pictures of the Regal before it’s demise have included stories of the Regal (Casino) in my book , Cincinnati’s West End along with The State, Lincoln, Peking, Hippodrome, Roosevelt and Dixie theaters http://www.amazon.com/Cincinnatis-West-End-Through-Eyes/dp/1456306022/ref=sr_1_2?ie=UTF8&qid=1363878705&sr=8-2&keywords=cincinnati%27s+west+end

Built as The Casino Theater in 1913 and opened as same in 1914, in the 1940"s its called Regal Theater. Architects for this venue were Rapp/Zettle/Rapp. Current owners in Nov. of 2013 are the Port Authrity Land Bank Cincinnati,Ohio. More info can be garnered at that site.

Jack F. Goldman operated the Regal from 1937 until his death in 1967 along with other major African American theaters in the city including the Roosevelt , Lincoln and Beecher. The theatre closed in his honor on February 23, 1967.

The Regal hit its stride in the mid 1950s with major acts appearing live including Lionel Hampton, Sarah Vaughan, Dinah Washington and The Ink Spots. It was then run by his son, Bert Goldberg. He was followed by Gary Goldman who refurbished the aged facility relaunching it as the Regal Cinema on February 27, 1970 with “A Long Ride From Hell” and “Sweet Body of Deborah.”

The Regal found its audience in the 1970s with Blaxploitation and Chop Socky films. But as the multiplexes and home video started to take their toll, Goldman had one more trick up his sleeve. The theatre underwent a $130,000 renovation in October 1991 an re-emerged as a triplex with the balcony cut into halves for screens II and III under the name, the Regal Cinema I-II-III. It closed under that name on January 3, 1994 with “Beverly Hillbillies,” “Robocop 3,” and “Jurrassic Park” sharing a screen with “Ernest Goes to Camp.”

The theatre was sold in 1996 with a plan that would have returned the Regal to a single-screened live theater. That plan did not materialize.

The Regal always frustrated me because they never listed showtimes in the newspaper, and only rarely even bought placement in a display ad, so as much as I wanted to visit there, I never knew what was playing. I guess they were content to cater solely to the immediate neighborhood for traffic.

If there were any way someone could compile a list of movies and playdates from its history, particularly the grindhouse days, that would be amazing.