Save the Roxy (Official) 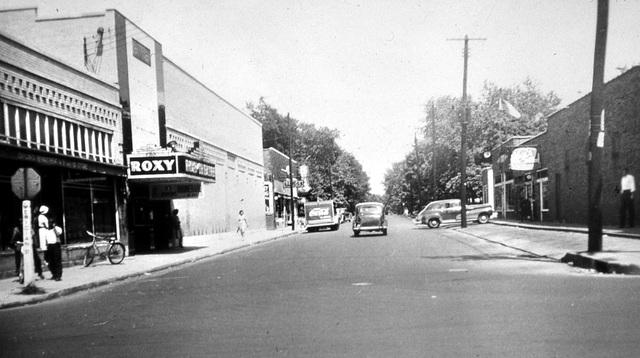 Located in East Nashville. The Roxy Theatre opened in 1939 with a seating capacity of 500. It was operated by Crescent Theatres. In the 1950’s it was renamed Woodbine Theatre, after another theatre with that name had closed.

It closed as a movie theatre in July of 1960. By 1970 it was in use as a Laundromat. In 1980 it went through a renovation and reopened as the Roxy Production Center with a recording studio and a 240 seat theatre. Operated by music producer Aubrey Mayhew, it was known as AMCORP Music Group and was frequented by Johnny Paycheck and other Nashville based stars. Aubrey Mayhew closed the studio in the early-1990’s, but continued living in the theatre building until his death in 2009.

The theatre’s future continues to be threatened by years ov vacancy and recent real estate speculation in the area. Recently, a volunteer group has organized to bring attention to the theatre. ‘Save the Roxy’ is a grassroots movement dedicated to preserving the memories, heritage, stories and places connected with the Roxy Theatre and surrounding structures.

You are welcome Lisa. I grew up in the area. I barely remember the theater being open but remember going to the speedwash that was in the building. My older brother and several of my uncles worked at the Roxy.

Dave, I had no idea that you had Northeast Nashville ties. I remember going to Mr. Roark’s home, after he retired, with my Daddy.

in 1915 a made in Nashville silent era movie entitled “ Sam Davis- A hero of the Sixties” played at the Parthenon theatre on june 5 1915.In part it was filmed at Travellers Rest plantation.Lillian Nicholson Sharon wrote the screenplay.My relative Joshua Brown was in the movie and was an actual Coleman Scout in the civil war.Looking for images from this historic movie.in Nashville paper 05-30-1915 article appears about movie and Hap Sudekum, Lucille Wilson Sudekum and Joshua Brown were shown as cast members. Lucille was wife of Harry Sudekum and Hap was brother of Harry.Talley Bailey

Harry Sudekum died young in 1930. His widow Lucille did not die until 1954 but is buried or entombed with him in the old Mausoleum at Spring Hill. Harry managed the Princess in its early days.

Clarence"Hap" Sudekum was the youngest of the Sudekum brothers and managed the Roxy all through the 1940s.

Chakra7: That’s a very interesting site. They mention the Imperial which was at 307 Wilburn, next door to where the Roxy was later built. It was only open a few years and by about 1920 the owner Mr M E Hutton went into the drug store business.

DavePrice: A comment on this theater by deecee from August 10, 2009, gives 307 Wilburn as the address of a house called the Rainbow Theatre, listed in 1928. This is the address of the Morris Jacobs building, an historic structure which has recently been restored.

Thanks, Joe. I had forgotten that. One W R Carnahan is listed in the 1928 City Directory as manager. Only listed that one year. Many of these short-time houses have been forgotten or overlooked. Dave

After studying the photos in the Roxy history to which deecee linked on February 10, 2011, I’m doubtful that the Imperial/Rainbow was in the Jacobs Building, even though that building now uses the address 307 Wilburn. The caption of the photo from The Tennessean of September 13, 1914, says that there was a movie theater in the new building pictured.

At some point after the Roxy was built, the addresses on the block must have been reconfigured and the Jacobs building given the number 307. This means that the Imperial Theatre of 1914 and the Rainbow Theatre of 1928 must have occupied what later became the screen end of the Roxy’s auditorium. You can see the sealed-up entrance of the original theater about midway down the wall of the Roxy in the photo above, although the pediments were removed when the wall was raised to accommodate the Roxy’s balcony.

I’m not sure what originally occupied the Morris Jacobs Building, but the Roxy history page says that in the 1940s the former drug store space on the corner of Meridian Street became Morris Dry Goods. Maybe it was the same Morris, and he moved his store to the corner for better visibility.

Joe: You must be correct- the article about the stores in the long building says it is at the corner of Meridian where the Roxie entrance was by the time I used to go there.