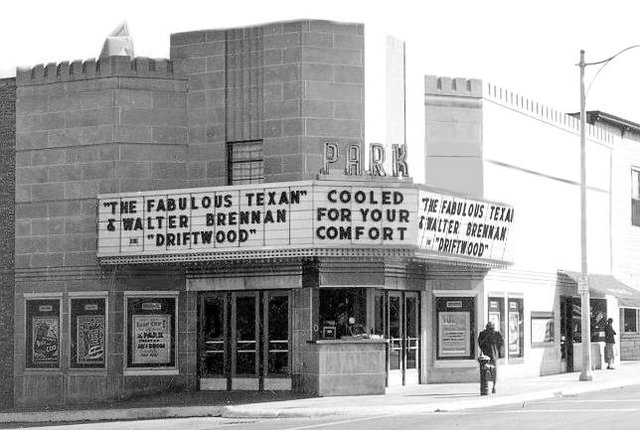 Opened in 1948, the Park Theatre used to show a lot of first run movies–I especially remember the horror movies. I saw “The Blob” there. I think it closed in the 1970’s. It was located on the east side of Sheridan Road around 18th Street.

The Park Theatre was expected to open in about thirty days when Boxoffice Magazine’s issue of April 24, 1948, published a rendering of the proposed house drawn by its architect, Erwin G. Frederick. Owners K&S Theatres already operated the Sheridan Theatre nearby. The new Park Theatre, designed in the moderne style, was to seat 750. The principals of K&S Theatres were Joseph R. Klein and Sidney Schatz.

The seating capacity of the Park was given as only 700 in a later announcement of its opening, in Boxoffice of August 14, 1948. This item said that the new house was a replacement for the K&S circuit’s Sheridan Theatre. The Sheridan is not yet listed at Cinema Treasures.

Boxoffice gave the location of the Park Theatre as Sheridan Road at Foss Park Avenue. Google Maps says that’s the 1600 block of Sheridan, in both directions from the intersection. A business called General Insurance can be identified in Street View, and is located at 1632 Sheridan. The intersection was “T”-shaped, and judging from the 1982 photo the theater probably occupied the northeast corner, now a vacant lot which would have an address of approximately 1635 Sheridan. It’s almost directly across the street from the General Insurance office.

Sidney Schatz passed away at 96 on April 2, 2009 at Balmoral Nursing Home in Lake Forest, IL where he resided after suffering a stroke eight years ago.

Born in New Hampton, IA on Jan. 14, 1913, his family moved to the south side of Chicago when he was eight years old. After working as a clerk for a stock broker, he managed a theatre in Chicago, which led to two of his life interests, investing in the stock market and owning a theatre.

He rented and operated the Sheridan Theatre in North Chicago, IL until he built the Park Theatre in 1947, which he owned for 23 years, after which he semi-retired and sold real estate part-time. He was a longtime member of Congregation Am Echod in Waukegan, IL and a former member of North Chicago Lions Club, North Chicago Chamber of Commerce, Lake County Board of Health and treasurer for North Chicago Little League.

Sidney was survived by his sons Marc (Carol Jakaitis) of Mequon, WI and David (Susan Gehlmann) of River Forest, IL; grandchildren Jeff, Dave (Angie Massen), Timm (JoellePolivy), Dan, Ben and Stephanie; and great-grandchildren Nate and Jon. He was preceded in death by Lois (Stein), his wife of 46 years, in 1984; his sisters Ann Harris and Pauline Peterson, and brother Milton Schatz.

Funeral service were at 11 a.m. Friday, April 10, 2009 at Peterson & Patch Funeral Home in Waukegan with Rabbi Ze'evHarari officiating, and interment at Memorial Park Cemetery in Skokie, IL. Memorials to the American Stroke Assn. are appreciated by the family.

(Chicago Tribune, July 10, 1992 by James Hill) It has gone from the mayor, to the Building Commission, to the Zoning board to the City Council, and finally to court. A sign on the marquee of the former Park theater in North Chicago optimistically proclaims: “Watch for the Opening of The Church of the Word of God.” But after four years of battling with the city’s hierarchy, Rev. W. Littlejohn, pastor of the tiny Lake County church, still is waiting to find out whether he will be able to transform the long-vacant former skin-flick theater into his congregation’s new home. The latest battle in this prolonged war ended Thursday after two days of testimony in Lake County Circuit Court. And no one will know how that turns out until Aug. 26, when Judge Jack Hoogasian is expected to give his ruling after he gets back from vacation. The problem for Littlejohn is that the location of the theater along Sheridan Road is not zoned for a church and lacks sufficient parking space, according to the city’s attorneys. There have been public hearings and City Council meetings, but still Littlejohn’s request for rezoning the property has been denied. In the meantime, Littlejohn and the theater’s owner, Tracy Lamb, who donated the property to the church, already have spent $25,000 to remove asbestos in the building in an effort to bring it up to code. Littlejohn and his church would eventually have to remodel the entire building, which has been vacant for 20 years. “The city acts like they are going to revitalize the area and nothing has been done around here for the past 20 years,” Lamb said. “It just gets worse and worse. It’s dead.” Along the blighted stretch of Sheridan Road where the Park theater is located, Littlejohn says that anything would be better than nothing. “The city says we can’t put a church here because under the city’s 21-year-old comprehensive plan, this is supposed to be the central business district, and to put a church here they would nave to rezone the area to residential,” attorney Ivan Terper said as he stood in front of the Park theater. “Well, take a look around you.” On both sides of Sheridan Road, where business is supposed to be booming, it has gone bust. The meandering, two-lane blacktop from Broadway to 14th Street is dotted with vacant lots, boarded-up buildings and just a couple of homes. So, in an area where there is plenty of room for improvement, why not let the church move into the neighborhood? “Because the church doesn’t bring in any revenue,” said Littlejohn, who has pastored his 50-member church in a converted laundromat at 1820 14th St. for the last seven years. “But say you want to put up a strip joint, and the city will have you in here tomorrow.” Say what he will, the city still won’t budge. “They are trying to narrow things down to saying, ‘What better use for the property than to use it for religious purposes?’” said North Chicago Atty. Chuck Smith. “Well, you wouldn’t put a church in the middle of Hawthorn shopping center, so why put it in the middle of the central business district. (continued below)

(continuing) “Just because the area is currently in an economic decline, which the mayor and the City Council are trying to turn around, is no reason to change the zoning laws that have been around for years to include a church,” he said. And the parade of city developers and planners who testified for the city all agree. “Any downzoning of uses, particularly spot zoning, would be a step backward in the revitalization of the area,” said urban planning consultant Nicholas Trkla. City officials argue that there are about 500 vacant lots already in areas zoned for residential use where the church could build with a special permit. “Under current business zoning the property could have some 50 to 60 uses, and if it is rezoned to residential it would only have one,” said Jeff Meyer, director of planning and community development for North Chicago. “Anytime you start violating the principles of zoning, you open up the possibility for uncontrolled growth.” But Tepper said, “What growth?” Pointing out the signs that say: “Welcome to North Chicago-A City of Vision,” Tepper said the city is suffering from nearsightedness. “This area has been dead for 20 years. It is dead now, and will remain dead unless the city lets projects like this go forward,” he said.

TRACY LAMB, PIONEER IN DISCOUNT CINEMA (Annie Sweeney, Tribune Staff Writer, CHICAGO TRIBUNE, 1967) Tracy Lamb, 70, and a lifelong resident of Chicago and a theater and playhouse owner, designed a way for moviegoers to escape rising ticket prices: a discounted second-run show. Mr. Lamb, a Chicago theater owner and operator who quit high school to manage a movie house, died Saturday . Mr. Lamb at one time owned and operated 14 theaters in Chicago and pioneered the second-run discount movie show, which runs old movies at a cheaper price, in 1963 at the North side Howard Theater. “The thing he would be proud about was that he brought this idea of discount theater,” his daughter Sharon Lamb said. “He was bringing a really good bargain to people, and he really appreciated that sort of thing.” Mr. Lamb began his career as an usher at age 12, and he remained enthralled by the management side of the theater business, never aspiring to act. While serving in the Army, where he earned his GED, Mr. Lamb was in charge of entertainment for the troops. “He used to fall asleep in the movies,” his daughter said. Mr. Lamb also invested in plays and movies. Among the theaters Mr. Lamb owned was the Coronet Theatre in Evanston, which he redesigned in 1987 into the Coronet Playhouse. Other survivors include a daughter, Robin Koestner; and a son, Gary Lamb; and brother Bill LeBeau.