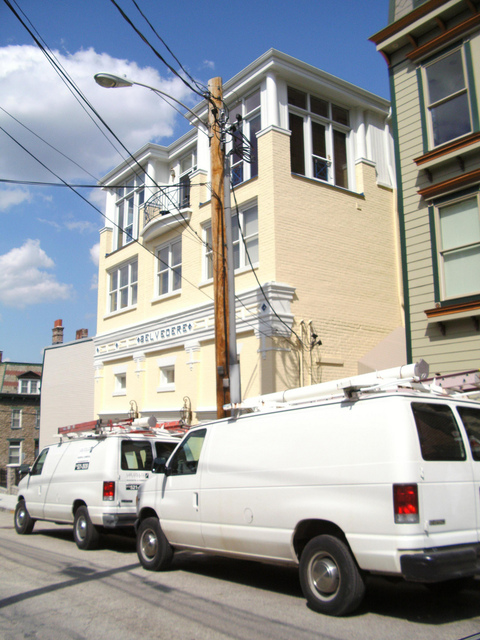 The Belvedere Theatre was opened on September 20, 1913 with 317-seats. In 1971 it was renamed Mount Adams Cinema. This theatre is likely best known as a scrappy independent operation high up in the hills outside downtown Cincinnati. In the 1970’s and 1980’s, it often subsisted entirely on screenings of “Harold and Maude” and “King of Hearts”, which before the days of tape and DVD, people would come to watch again and again. Before they closed, they expanded the playlist to other cult movies prone to repeat viewing. One time a friend called for showtimes, and the person on the other end asked what time could he get there. Sure enough, the show was held for his party because they wound up being the only people to come.

The Mount Adams Theatre was closed in 1981. It’s been hard to learn anything about the place post-mortem. Mt. Adams is a popular upscale neighborhood known for pubs and sightseeing: there is a church parking lot that has a magnificent view of downtown Cincinnati. Pity such an affluent neighborhood couldn’t sustain a local theatre.

Anyone with pictures, please post them. This is the one theatre of my childhood I never got to visit and it’s always killed me to have no memories of its appearance.

Tricia: thank you for sharing your memories of your dad and his time with the Mt. Adams. It saddens me that I never got to see the place when I lived in Cincinnati.

I’m wondering if you can help me with a little ROCKY HORROR history though. You’re claiming that ROCKY showed first at the Adams – do your remember the dates? My earliest memories of the movie playing in Cincy was seeing newspaper ads for it at a short-lived mini-plex in Corryville near UC – each room had its own name, so it was called “The Bijou, the Roxy, and the Ritz” – and then after that, its long residency at the Skywalk downtown, where I ultimately saw it. I’d love to establish a timeline for the movie.

I live in one of the two condos that used to be the Belvedere Theater. I would love to find some old photos from its days as a theater, church or saloon. Any help would be greatly appreciated.

Can’t add any new info, my family used to own The Belvedere Theater – remember it only as storage for WLW-TV set storage, I helped take out the old projectors in the late 50’s and donated them to my high school Andy

Am I out of my mind or was this theater the midnight showing home of Monty Python & the Holy Grail???

Yes, Monty Python and the Holy Grail had midnight showings in the late 70’s and early 80’s.

My Grandmother Bernadina Schumacher and her husband Herman Heinrich Schumacher and their (5) sins and (1) daughter lived in MT Adams from Approx. 1905 to 1946 +/–. It has been reported that my grandmother and her children after (Grandad passed, 1920) owned and ran the Belevedere Theater which was directly to the rear of their house on Fuller Street. I recall my dad and other family members talking about working at this Theater. I also recall seeing an article of the Schumacher involvement in this theater contained in a newspaper which was announcing the re-opening of the Belevedere many years ago. If anyone has any reliable knowledge as to how a German speaking widow with (6) children could have owned and or operated this theater so early in the film industry, I would appreciate it if you could report on this website or contact me directly, Larry Schumacher at Thanks

I do know that “THE ROCKY HORROR PICTURE SHOW” actually premieres at the Alpha Fine Arts Cinema in Northside. It played for one week and then went on to become the midnight favorite that everyone loves.

The Belvedere Theatre launched by Herman Heinrich and Bernadina Schumacher on September 20, 1913 as a 317-seat silent movie house. The theatre didn’t convert to sound and was offered for sale. The theatre catered to a neighborhood which had a Germanic clientele. The theater remained in operation to the end of the 1920s as a silent house but didn’t make the conversion to sound.

The theatre modernized in 1942 by operator George Buquo and his wife with a refresh and new sound system. Caroline K. Niedenthal , who operated the Evanston Theater, purchased the Belvedere continuing its operation into the TV age when the theatre was used for other purposes.

In 1971, Pat Montgomery took on the location and announced he would convert it into the Mt. Adams Cinema with 208 seats. It launched July 31, 1973 with repertory films, cult films and art films.

The venue became known for its regular weekend midnight screenings of “Rocky Horror Picture Show.” That film had played an unsuccessful two-week run at the Alpha Fine Arts in December of 1976. As the film gained cult status around the world, the Mt. Adams rebooked the film on its single-screen for the week of May 25, 1977 with three daily shows. The film found a cult audience and the Mt. Adams carried the show for five months. “Rocky Horror” would go on to runs at the Bijou, 20th Century and – perhaps most famously in Cincinnati – the Skywalk Cinema which carried the film from October 6, 1978 to January 5, 1991.

Parallax Theaters took on the Mt. Adams in the late 1970s closing it in March of 1979 citing lack of parking as the primary issue. The theater reopened in August of 1979 under new operators but appears to have closed in 1981 and offered for sale. It was said to have been vacant for most of the 1980s before being purchased in 1989 for $70,000 and used for other purposes.

The February 15, 1913 issue of Motography ran this somewhat sloppy notice in its “Ohio” section:

“Architect Anthony Kunz is receiving estimates for the Belvidere motion picture house to be built on the east side of Belvidere, north of Hatch, Mt. Adams, for Aloysium Schumaker.”

Misspellings and misdirection notwithstanding, the item clearly is about the Belvedere Theatre.

Rocky Horror originally attracted the Clifton arty punk hip types, but by the end of the show’s run it was drawing kids from Mt. Washington.