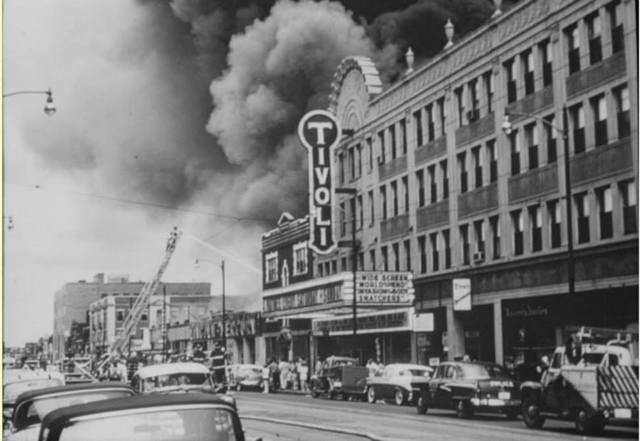 St. Louis' beloved Tivoli Theatre featured the finest in independent film and foreign language cinema. Architecturally and historically, the Tivoli Building is the most prominent edifice in the University City Loop area of St. Louis. It has a street frontage of 180 feet, is four-stories tall, houses seven specialty shops in addition to the theatre, and is listed in the National Register of Historic Places.

On May 10, 1924, the ornate Tivoli Theatre opened to the public with a seating capacity of 1,440. The evening’s festivities included speeches by St. Louis Mayor Henry W. Kiel and University City Mayor Warren C. Flynn, a photoplay called “The Confidence Man” starring Thomas Meighan, music from the Jules Silberberg Orchestra, Art Lee Utt at the Kilgen Wonder Organ and five vaudeville acts. The St. Louis Post-Dispatch described the theatre as having ‘luxury and splendour eclipsing that of any other St. Louis theatre’ and ‘the piece de resistance of glorified beauty’.

Through the years, the Tivoli Theatre went through numerous changes in ownership and was temporarily renamed Magic Lantern Theatre in September 1969. It was operated by Landmark Theatres (USA) from 1977 to 1991. It suffered a long period of decline and closed in 1994. Joe and Linda Edwards, owners of the nearby Blueberry Hill, bought the building and theatre and began meticulously restoring the Tivoli Theatre, bringing it back to its 1924 splendour.

After a renovation costing in excess of $2 million, the Tivoli Theatre reopened on May 19, 1995 as a three-screen theatre. Architects, designers and sightseers have toured the restored Tivoli Theatre, marvelling at the marquee, the 29-foot tall vertical sign, the newly-built box office, the vestibule with its terrazzo floor and ornate ceilings, the new seats, recessed ceiling domes, proscenium arch, side wall arches, stage, orchestra pit and lush burgundy curtain. With the renovations complete, people could once again enjoy seeing great movies as they were filmed to be seen—on a big screen in an architecturally stunning setting. From 1999 to 2020 it was again operated by Landmark Theatres (USA).

The Tivoli Theatre is listed on the National Register of Historic Places.

It was purchased by the One Family Church in 2021.

Hey JAlex- what are your sources for info on the Tivoli? Am writing a report and need solid info.

My sources are contemporary (meaning 1924) St. Louis newspapers which are available at local libraries.

Wow! The U-City Cinema! The place where this whole movie loving obsession of mine began some 36 years ago! Wish I could read what was on the marquee! Thanks again, Norman!

Wow. That is the very first concession booth I ever remember visiting. Amazing find!

Temporarily closed/temporarily retired the name “Tivoli” on Monday, September 1, 1969, with Sidney Poitier in THE LOST MAN and Richard Widmark in MADIGAN. Re-opened on Monday, September 15, 1969 as the Magic Lantern with a “New British Talent” festival featuring the Peter Collinson films THE PENTHOUSE and UP THE JUNCTION. (St. Louis Globe-Democrat)

Visiting from out of town on spring break, I saw “Fargo” here just after it opened in 1996. It ended up being one of my all-time favorites.

I believe the theatre was purchased by a church and they’re now running church services in the main auditorium. Not sure if they still show films.