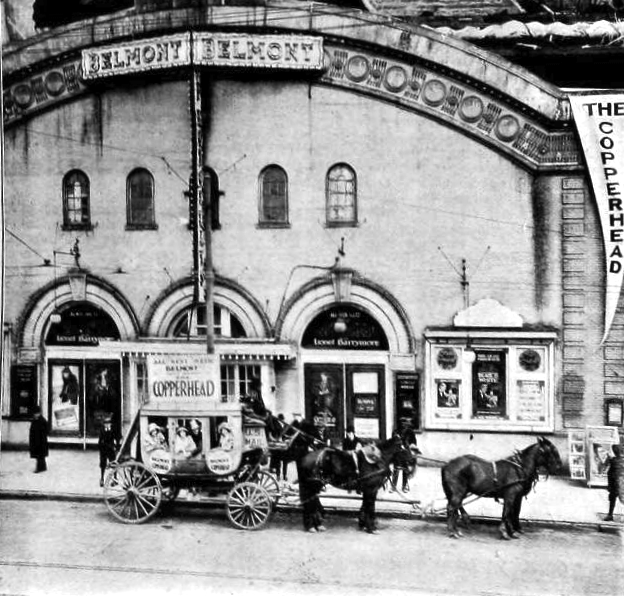 This 1,000-seat movie house originally opened in 1914, located at 52nd Street and Filbert Street. It closed in 1970. Today, there is a laundromat at the address.

A little information about this building. I grew up around the corner from this theater, and I my memories as a child was of the building being closed, and in poor shape. In fact the building was next to a restaurnat called Horn & Hardart. Sometime between 1970, and 1975 both buildings were raised. The spot that housed the Horn & Hardart became a fast food chain, and the Belmont location became just an empty parking lot.

Here is an expanded version of one of the 2005 thumbnails from the PAB site. The photo is from the Irvin Glazer collection:
http://tinyurl.com/2as29g

Here is another photo from the same source:
http://tinyurl.com/lh3tmy

I grew up not far from here and recall the theater being used as some sort of ‘70s disco/club, and it was definitely next to H&H. When the Market-Frankford El was being renovated in '06, the bus stop was temporarily relocated directly in front of where the Belmont stood. There are new(?) stores on that spot now.

The Belmont Theatre building was demolished. Today, other retail buildings have replaced the theater building.

An item in the September 4, 1915, issue of The Moving Picture World noted the retirement from the theater business of pioneer Philadelphia exhibitor Samuel Wheeler, and said that he had built the Belmont Theatre:

“Samuel F. Wheeler, one of the leading lights in the local field of the moving picture industry, recently announced his intention of retiring from that line of endeavor. When the moving picture business was in its infancy Mr. Wheeler built the Fifty-second Street theater, Fifty-second and Sansom streets, and experienced remarkable success from the first. He soon began looking around for ground upon which to erect a much larger house, with the result that he erected the Belmont theater, Fifty-second street, above Market. Following this he built the Apollo theater at Fifty-second street and Girard avenue.

“Following the construction of the Apollo things began to break in the wrong direction for Mr. Wheeler and he soon sold his latest theater. Business continued to fall away on account of keen competition in the neighborhood of his theaters and Mr. Wheeler came to the conclusion that he would devote his entire interest to his original occupation as a lawyer. The Fifty-second Street theater and the Belmont theater may either be bought or leased. It has been rumored that the Felt brothers, proprietors of the Locust theater, Fifty-second and Locust streets, will buy the Belmont.”The January 22, 1916, issue of MPW said that the Felt Brothers had taken over both of Wheeler’s 52nd Street houses:

“The Felt Brothers, proprietors of the Locust, West Philadelphia’s leading moving picture theater, recently added to their place in the local field by taking over the Fifty-second street and Belmont theaters, which were formerly conducted by Samuel H. Wheeler. With the acquisition of these properties by the Felt brothers comes a change in the management policy of both houses. Henceforth in the afternoon the price of admission will be five cents at the Fifty-second street theater and ten cents at the Belmont. In the evenings the prices will be fifteen cents at both establishments. It is planned to show nothing but first class pictures and Messrs. Felt and Felt, who have already made themselves known in Philadelphia moving picture circles, expect to meet with their usual success in this enterprise.”