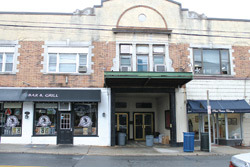 The theatre opened in the 1920’s and is currently closed with plans for conversion into a venue for live stage performances. Harrison is situated in Westchester County, about 45 minutes by car from Manhattan.

It was announced in November 2015 that the building would be demolished to build apartments on the site.

The Biltmore Theatre in Harrison was owned by Mr. Tommasino in the l940’s-1960’s (during the week day he would show Italian language films)…gosh I would love to have some of the weekly programs at this point!….I started attending the theatre at age 7 in 1947…golden age….The owners son Al (Mr Tommasino had two sons) was in my class at Harrison High School) and I serentipiously ran into Al during my first sojourn to Rome in 1963 when I was crossing a plaza to American Express when I heard someone call my name….it was Al who had relocated to Rome to work with his father (I believe the theatre had been sold at this point) and said one of the properties his father owned was the Saudi ambassidors residence…and since he had just recently died….why didn’t I stay there and we could spend some time viewing the city’s landmarks and hideaways….thank you Biltmore Theatre for introducing Al to me!

I just unearthed an old real of family movies than depicts Harrison on July 2, 1927. Among other things, it shows the Biltmore theater which was showing Laura La Plante in The Love Thrill. Cool looking old movie house…

Are there any old/historic photos of this theater? It would be interesting to see what it looked like back then….

I am an architecture student working on a project on this cinema. If there are any pictures you would be willing to share, it would be greatly appreciated! My email is

Fatima-r: The theatre has always been a big, plain rectangular ceiling with no character. I believe that it originally contained a stage but was removed. Rumor has it that Harrison will FINALLY undergo a redevelopment after many years of discussion and the theatre will probably be torn down.

To the relative of Sam Cornish: I am doing research on the Ojai Playhouse (Ojai Theatre in Ojai, CA) and your great uncle leased the theater in our town beginning in 1958. I’m still doing the research so I don’t know how long he stayed. He was already quite old when he came here.

For the latter half of 1985, it was owned by Ed Bebko, a theater operator from Buffalo looking to expand his business. It ran second run films but didn’t catch on.

Uploaded an undated photo of the Harrison in better days and a current one.

It was in the newspaper today that the theater will be demolished and replaced with a six story luxury apartment building with ground floor retail. Here is the newspaper link:

My Great Grandparents built this Lyceum building and opened the first cinema. My Great Aunt and my Grandmother played the piano for the silent movies. The original owners were Michael and Mary Ceclia Belluscio. They lost it in the depression but not before a fire (supposedly my uncle and friends having a poker party after hours too close to film storage and too many cigars). My Uncle Paul acquired it again and sold it back to his father for a small amount. There were multiple shops below – bakery, toy store, etc. over the years and my mother was an infant in one of the apartments for a while. I would LOVE to find an old ad for a movie and I’m happy to give you the pictures I have but they are not of the working theater. Jen