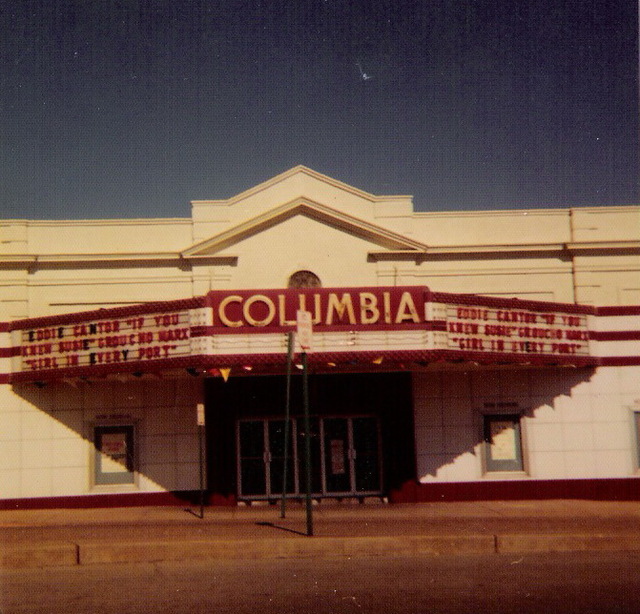 The Columbia Theater was located in the Italian section of St Louis, which is known as The Hill, and opened February 1, 1926.

It is believed that a young Joe Garagiola worked at the Columbia Theater as a youngster before going on to greater success in the sport of baseball, along with his neighbor Yogi Berra. In 1948 it was remodeled to the plans of architect Hugo K. Graf.

The Columbia Theater is now a residence.

I remember seeing a doubble feature posiedon adventure and ledgon of hell house. dont see those any more

There is an item in the July 15, 1916, issue of The Moving Picture World which says that the Columbia Theatre in the Clifton Heights district of St. Louis had opened recently. The theater operated on a pictures-only policy, with admission charges of five cents on weekdays and ten cents on Saturday and Sunday.

Clifton Heights is immediately adjacent to the neighborhood now called The Hill, and I think that this theater is most likely the same Columbia Theatre opened in 1916. The style of the building with its classical pediment and cornice is characteristic of the later 1910s.

The earlier Columbia Theatre at 6th and St. Charles Streets downtown was in operation at the same time as the Columbia Theatre in Clifton Heights. While the downtown Columbia was primarily a vaudeville house, it was equipped to show movies. an item in the July 8, 1916,issue of The Moving Picture World says that the downtown Columbia would be showing movies made by the Triangle studio, which had previously been exhibited at the American Theatre. The American, owned by the same company as the Columbia, was being closed for the summer.

I think the Columbia Theatre mentioned in the 1916 Motion Picture World was the Columbia Airdome located at 6230 Columbia. My research shows this operating from 1914 to 1917.

The impression I got from the item was that it was an entirely new theater in 1916. This is what it said:

St. Louis, Mo.—The Columbia, a new theater in the Clifton Heights district of St. Louis, opened recently with an all-picture program, and with an admission price of five cents during the week and ten cents on Saturday and Sunday, when special features are shown.“Is it possible that the operators of the Columbia Airdome built an enclosed theater on their property in 1916?

The Columbia is now a private residence , the roof over the auditorium removed, swimming pool installed.

Opening year should be 1926, not 1916. The building permit for the structure was issued in August 1925 and theatre opened for business on February 1, 1926. The architect of the original structure was Preston Bradshaw.

This item from the July 4, 1925, issue of Motion Picture News might be about the Columbia Theatre, though the location gives a street name that doesn’t exist now:

Here’s an article about the transformation of the Columbia into a private residence. Plus the reason why it closed for good. http://www.laduenews.com/abode/features/columbia-theater-once-grand-movie-palace-turned-private-residence/article_04127fcd-b4fb-5334-93a0-6e57fa14679b.html