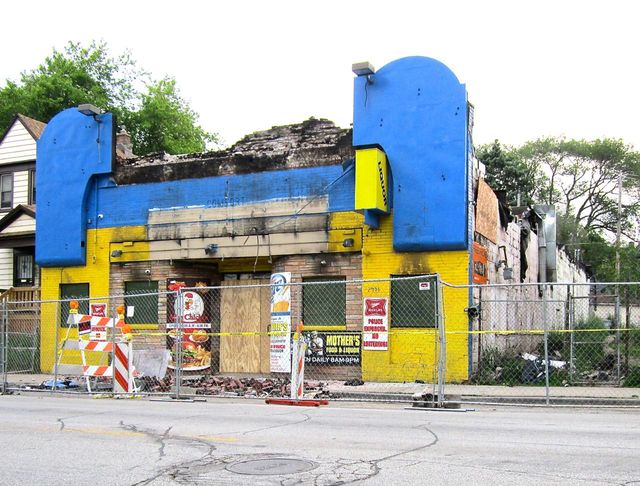 The Comfort Theater opened in 1914 and closed in 1934. In recent years it operated as a food and liquor store, and was destroyed by fire in May 2015.

The 600 seat Comfort Theater was being used as a tavern by 1986. Any update on that information please? Thanks

Just how much comfort the 600 wooden seats of the COMFORT provided to its patrons is not known, but recent photos show the facade of the single story building to be so altered that it is indeed difficult to believe that it ever was a cinema, since it never had a stagehouse. The front is now covered in false brick and wooden vertical planks, but something of the marquee remains in form of the suspended canopy which is badly banged up, but the amateur non-illuminated painted signs read only “Andy’s Place” or “Beer/Liquor,” but perhaps the single glass pane and security grilled door now does lead to something reflecting the building’s past, since a small sign on the side of the wall reads: “Giant TV.” The former COMFORT may now provide that only the form of a bottle to this deteriorating north side neighborhood, sad to say.

If you look closely just above the sign above the door, you can still see the letters of the name of the theater – COMFORT – molded in a cement sign.

Sadly, this building was lost to a fire this past week. An article here – http://shepherdexpress.com/blog-11654-eulogy-for-a-movie-house.html – discusses the theatre.