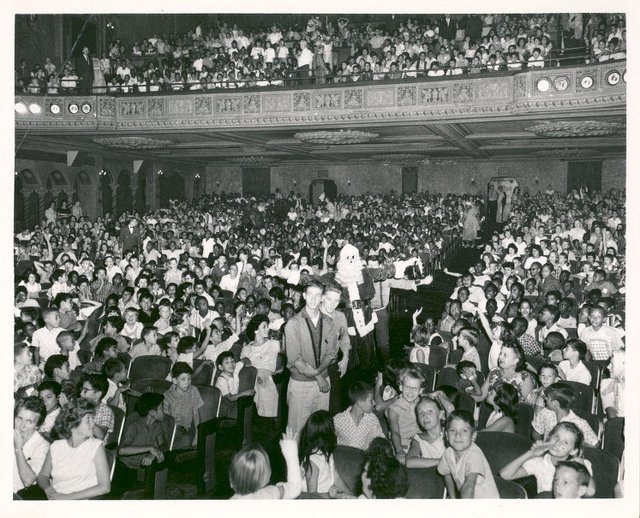 The Uptown Theater opened on January 6, 1928, to capacity crowds, with vaudeville acts, a full orchestra, and the film “The Irresistible Lover”. It was built for Carl Laemmle’s Universal Pictures.

Designed by famed Austrian-born theater architect John Eberson, the auditorium, which once sat 2,300 patrons, was created to look like an Mediterranean courtyard, complete with Classical style arches and columns, and sea-side views on the side walls. The ceiling featured a field of twinkling stars, drifting clouds, and for a time, mechanical birds.

In the late-1930’s, the Uptown Theater copyrighted a Fragratone system, which funnelled fragrances into the auditorium via the ventilation ducts. In April 1943 the World Premiere of “Stormy Weather” starring Bill Robinson & Lena Horne was held at the Uptown Theater. The theater continued to feature stage shows and film until well after World War II, and remained one of Kansas City’s most profitable theaters as late as the 1960’s.

In the 1970’s, both the Lyric Opera and the Palace Dinner Theatre used the Uptown Theater as their home in addition to hosting concerts and live performances on its stage. In 1989, the Uptown Theater at last closed its doors and soon fell into a state of disrepair.

Five years later, the UGA LLC bought the theater and began a year-long, $15 million restoration project which returned the theater back to its former glory, including Eberson’s decoration in the auditorium, and the lobby’s original color scheme. Seating in the main auditorium was also reduced by about 500 seats. Furthermore, a large addition was made to the original Uptown building to facilitate meetings and banquets.

Today, the Uptown Theater is one of the Midwest’s finest restored historic movie palaces. It plays host to concerts and special events, such as weddings, corporate events and other occasions.

From the J.K. Redmond Photo Archives come these vintage images of the Uptown Theatre -
View link

I can remember going to the Uptown on Sunday afternoon’s. Alberta Byrd used to give organ concerts and play request for about 30 min. before the show would start. This was probably around 1949 or so.

Although I don’t live in KC anymore, I was happy to catch some glimpses of the remodeled Uptown when President Obama made a speech on his recent trip to KC. It looks Great! My compliments to Larry Sell and his efforts to keep this beautiful theater in good shape.

National General had reduced the Uptown’s admission price to 50 cents (their other KC theaters were sold to Mann Theaters by summer; its sister theatre, the Brookside, then took over as a 50-cent-house by summer) before what appears to be its final day as an all-out movie theater on Sunday, April 15, 1973, with a Disney double feature of SNOWBALL EXPRESS and $1,000,000 DUCK.

A friend of mine, Jack S. Who at one time was the assistant mgr of the Uptown and was mgr of the Apollo before it closed for the last time, told me the last time he was in the Uptown was during that 50 cent era. He said it was in bad shape. The floors were sticky from spilled drinks and just wasn’t clean. It upset him to see it like that and he never went back.

The Uptown actually opened on Friday, January 6, 1928 (I’m looking at the ad) for an 8:15pm reserved-seat premiere, although regular showings did begin on Saturday afternoon the 7th. [Kansas City Times]