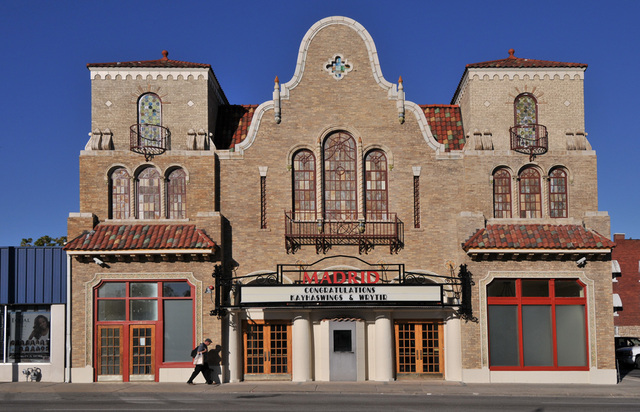 The Madrid Theatre was designed in Spanish style inside and out. The interior featured ornate plaster and the ceiling featured many large ornate angel medallions. The exterior looked much as it does today, yellow brick with terra cotta details and stained glass.

The theatre was constructed in 1925 and opened to the public on May 29, 1926 with Ford Sterling in “Steppin' Out” on the screen, a ‘Big Stage Show’ on the stage, film star Reginald Denny appearing ‘in person’ and Golden Eviston playing the 3 manual Wurlitzer organ. The Madrid Theatre was built and owned by the McCormick Construction Company and leased/operated by George Trinastich.

In the 1930’s, Howard Hughes, billionaire owner of RKO Pictures, bought up many theatres across the US, including the Madrid Theatre and the Warwick Theatre, just over a block away. After a decade, the Madrid Theatre closed as a movie house on January 16, 1942 with a ‘for one day only’ screening of Janet Gaynor in “A Star is Born”.

The Madrid Theatre sat unused until the early-1950’s when sadly it was purchased and gutted. The floor was leveled and it became a warehouse.

Saving the building from the wrecking ball, in 1983 craftsman Victor Patti bought the Madrid Theatre with the intention of restoring it to its grandeur. In the meantime, Patti used the building as his wood shop. In the fall of 1995, a group of investors dedicated themselves to the restoration of the Madrid Theatre.

The Madrid Theatre was beautifully restored and again opened its doors in the summer of 2001. Though few original architectural and decorative elements remain, be sure to look at the ceiling for the beautiful angels.

Yes, the Madrid does have an upper balcony, and it appears the original design did have additional seats along the sides.

Here are links to some photos taken after the renovation.

Here is the front facade and entrance:

The fountain in the lobby:

Stairs to the upper lobby:

Its for sale because Karl Schimell, owner of Madrid Theatre can’t get a liquor license besides having a lack of parking.
He has also heard that lightrail will be coming down Main Street (in about another 8 years) which for any business is bad news unless your James B. Nutter.
Karl Schimell is very unhappy with the new catering ordinance since he can’t have his salsa every Friday night.
Whoever buys the theatre will have to deal with the neighborhood association.

Just think. The neighborhood told him it was a very, very bad idea to renovate the theatre. I guess they were right.

New webpage address is www.madridtheatre.com They have some photos – looks like some architectural details survived, still has a horseshoe balcony, and a proscenium arch (although devoid of ornamentation)

The June 5, 1926, issue of The Reel Journal said that the new Madrid Theatre in Kansas City had been designed by the architectural firm of DeFoe & Besecke (Victor DeFoe and Walter A. Besecke.)

The November 28, 1925, issue of The Film Daily also notes DeFoe & Besecke as architects for a theater to be built on this block, though it gives the locations as 39th and Main Streets and the Madrid is closer to 38th Street. Original plans also called for more seats:

The (Fox) Madrid’s final day as a movie theater—with 10c admission—was Friday, January 16, 1942 (the day of Carole Lombard’s plane crash), with a one-day-only-marquee of Janet Gaynor & Fredric March in the 1937 version of A STAR IS BORN, and Randolph Scott & former silent-film star Hope Hampton (in her last-ever screen role) in 1938’s THE ROAD TO RENO. There are no listings for it as an active movie theater in the city newspaper after that. [Kansas City Star]

“The first building in Kansas City to have air conditioning. There used to be an icehouse next door that moved blocks of ice via a conveyor belt…these ornate looking circular fixtures had large fans above them which circulated the cold air from the ice.”