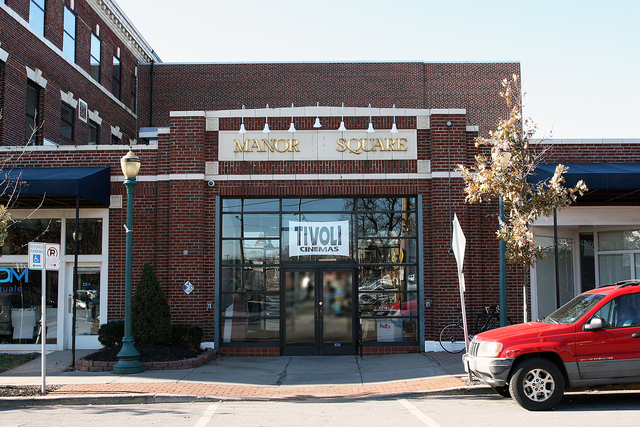 The Manor Square 3 opened on December 18, 1987, in a Colonial style red brick building. It got the name form its location in Manor Square in the Westport area. It was later given the name of the Tivoli Manor Square. The Tivoli Cinemas is noted for its quality first run art and independent films. It was closed April 11, 2019.

The Tivoli web site is: www.tivolikc.com

current photos of this building may be seen at:

I believe the “Manor” part of the name comes from being located in the building which used to house Manor Bakeries.

In the 1980’s, this theatre was operated by AMC Theatres, and was known as “AMC Manor Square 3”

I went to see Arbitrage here today. Though hidden above a number of office buildings, it’s a place with a lot of charm once you take the stairway up to the theatre. Though the auditoriums are obviously of the split variety (you can tell as the seating arrangements were never redone) and the seats are old, they are very comfortable.

Another nice touch is the old posters that adorn the lobby (mostly Godard and Truffaut) and even the projection booth (I noticed an original one-sheet for The Gauntlet when I went in and peeked at the projection window).

Closing April 11, 2019 with “The Mustang” and “Woman at War” splitting with “The Aftermath” and “Gloria Bell.”

There is a heartfelt letter by owner Jerry Harrington at the website
www.tivolikc.com detailing the reasons for closing.

This theater was originally opened by Mid America Cinema on Dec 18 1987 as the Manor Square 3. AMC took over operation of all Mid America theaters on January 6, 1989. The Justice Dept decided that was a monopoly in the Kansas City area, and Crown Cinema Corp took over in 1990. In 1992, Crown Cinema turned this theater over to Mr. Harrington, who had already been operating a Tivoli Theater in Kansas City. He changed the name of this theater to Tivoli Manor Square, and operated both “Tivoli’s” as arthouses for several years, eventually closing the original, and keeping this one.

Arthouse patrons in Kansas City owe Mr. Harrington a debt of gratitude for this fine venue.

The screening room at the nearby Nelson-Atkins Museum of Art will be re-named as the Tivoli, scheduled for an October 21, 2019 contributor’s re-opening featuring Keaton’s THE GENERAL (admittedly a very funny but rather over-utilized silent-era war horse; my own vote would have been for the more manic and personable SEVEN CHANCES). No word on the digital projector model type to be installed, or if the reported upgrades will include a multi-channel sound system, or exactly how regularly connected this new version will be to legitimate commercial and classic cinema. There are several KC news stories on this now available to read online; page creator will need to determine if this ‘new’ Tivoli merits its own CT page or changing the address and status for this one.