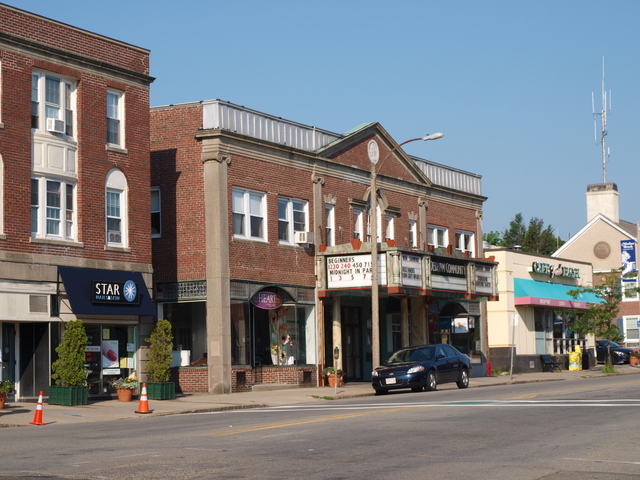 A two-screen, locally-owned cinema in the heart of Dedham Square, the Dedham Community Theatre shows a variety of art house and first-run independent films.

It’s been there since 1927, one of the few survivors of an era when every suburb had at least one downtown theater.

The charming theatre offers fresh popcorn with real butter, wine and beer - and is available for rental for special events, from children’s birthdays to weddings.

The gala 80th birthday bash for the theatre was apparently held at 7PM Friday Nov. 9th. Tickets were $80 each, and it served as a fundraiser for restoration of the theatre’s marquee.

Does anyone know if this theater now has a new or renovated marquee out front? Last Thurs. or Friday evening, the local TV news on one of the Boston stations covered some sort of event in front of the theater and, although I wasn’t paying attention, I thought they made reference to the marquee being “new”.

Yes, the theater got a grant to put up a new marquee.

It probably goes without saying, but the Cinema de Lux at Legacy Place is killing the nearby Dedham Community Theatre.

“Nearly two months after the opening of the Showcase Cinema de Lux movie complex at Legacy Place, the historic Dedham Community Theatre is struggling. Its sales are down significantly, including what owner Paul McMurtry calls â€œsome glaring examples of business being very slowâ€ â€” such as a few nights when the theater closed early after no customers came for the 7 oâ€™clock shows.

“McMurtry said he had never experienced that since he bought the theater in 2002.”

While talking to the reporter for the story, the general manager called up to the projectionist to cancel a weekday 4:45 pm showing. There were no customers

It’s pretty sad. It also comes at a time when the indie circuit is pretty slow too.

Wow i seen the area has changed in Dedham

The DCT is alive and well! Business has balanced out considerably since Cinema de Lux at Legacy Place first came into town – the truth is that cinemas large and small have seen attendance go down in the last few years, but the DCT is lucky to have the continued support of decades of loyal patrons, as well as having been the home for many quality, award winning films. Check out the new mobile site for smartphone users!

The Theatre Historical Society archive in Illinois has the MGM Theatre Report for the Community Theatre. Located in “Dedhan Square”, built around 1925, 994 seats, in Good condition; showing MGM product for over 10 years. There is an exterior photo taken in March 1941.