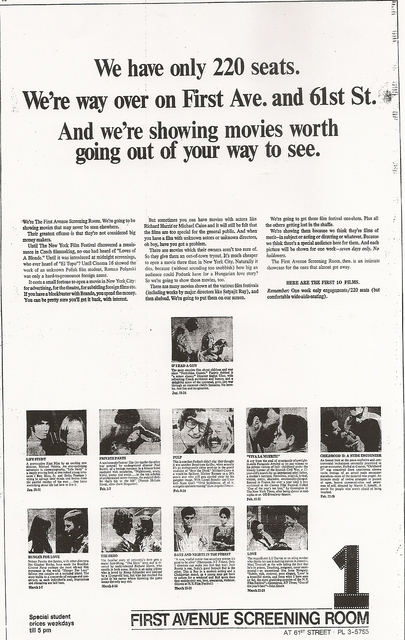 On March 19, 1975 it was renamed Byron Theatre and operated as a gay adult movie theatre, opening with “The Devil and Mr. Jones”. The Byron Cinema became the Eastworld Cinema in 1980 to 1981. In 1982 until 1990 it operated as Art East Cinema. In 1991 it was briefly renamed York Cinema and played regular recent movies, and then went back to the Art East Cinema name until it closed in 1994.

Interesting. I don’t recall the First Avenue Screening Room being renamed York Cinema, but I do remember a York Cinema from the 1960s a few blocks uptown, at about 64th St. (on the same side of First Avenue). That York Cinema was a revival house owned and operated by Warner LeRoy, until he used the space to expand his then-booming restaurant – Maxwell’s Plum.

I was either the first or one of the first doorman/ushers who worked at the FIRST AVENUE SCREENING ROOM. ED SULLIVAN, went by one night to view on of the movies. Mr. Abe Mansfield was the manager at that time and Jim Dalmedo was the assistant manager. The projectionist was New York City’s second or first female projectionist. I saw some great and very interesting movies there.

The transition to the York had to be very very brief…was it ever the EastWorld as well as the Art East?

I visited this place on June 8, 1973 to see the Japanese film “Funeral Parade of Roses” by Toshio Matsumoto. It was the First Avenue Screening Room then.

“The Harder They Come” (which went on to become a classic) premiered at the First Avenue Screening Room. At the time, few of us knew about this Jamaican music known as ‘reggae.’ or had even heard of Jimmy Cliff.

Also, “Dodes'ka-den” premiered at the First Avenue Screening Room in 1974. It was a sign of how far Akira Kurosawa’s reputation had fallen that a) it took four years for this movie to get shown in the U.S., and b) it could only get a showing in this incredibly tiny theater with a tiny screen.

I definitely remember this place as the York in late 91/early 92. I was at NYU living in the east village and at the time there were no 2nd run theaters. The Worldwide Plaza didn’t convert for a couple more years, so when this was announced, I was super excited to save some money, being a starving student and movie freak.

I only went three times because it was a trek. I used to walk everywhere and I’d head up 1st Ave (which was really a beautiful walk when the weather was nice) and catch a weekday matinee for $2. The theater was kind of a pit at that point, and I want to say that 2 of the three times I was there, I was the only one in the house. I saw 29th Street, Frankie & Johnny and The Addams Family there. Not sure why I never went back after that. 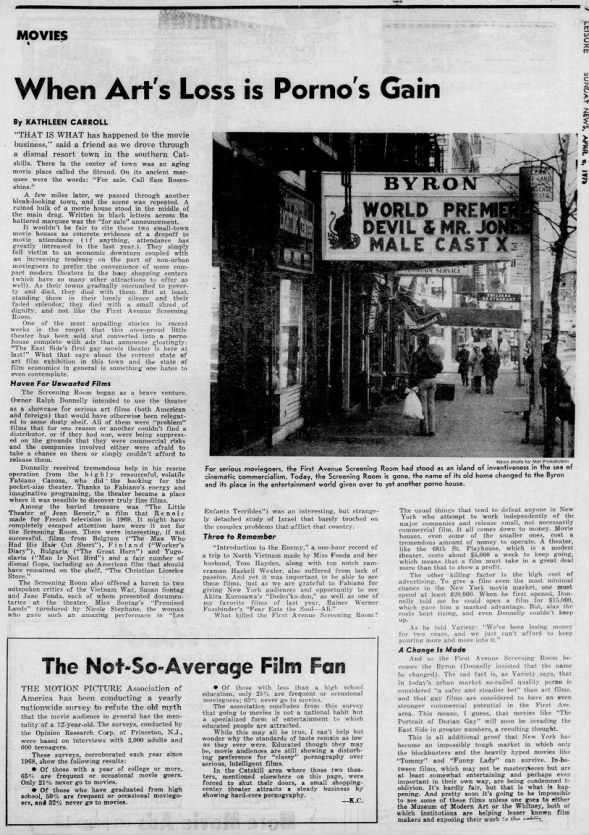