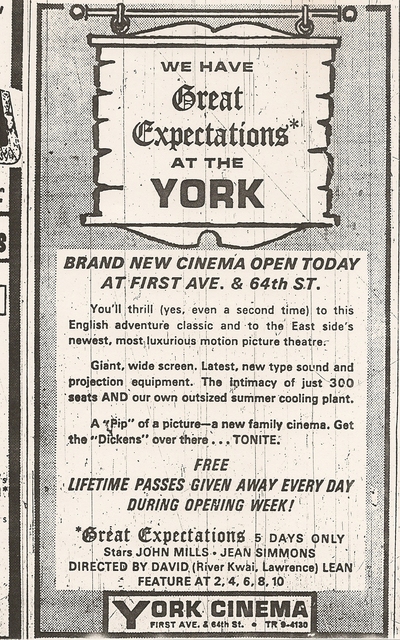 The Victor Theatre was operating prior to 1914. By 1926, it had been renamed East End Theatre. Does anyone have any further information about this theatre, perhaps best known to Soupy Sales fans as the theatre used in the opening and closing credits of his 1964-66 WNEW-TV show.

Listed in the American Motion Picture Directory 1914-1915 as the Victor Theatre(the address is given as 1185 First Avenue).

The apartment building housing the Duane Reade on the corner of 64th & 1st Ave (actual address 345 E 64th St) was, according to city records, erected in 1996. So presumably the York Theatre was demolished then.

I too have attempted to do some sleuthing on this theatre due to its appearance on the Soupy Sales Show !

In 1966 a comedy club called Mr. Laffs was operating at 1185 First Avenue, so the original Victor must been scaled down at some point.

The map above links to the wrong street as the York was on 64th street. Here is a 1964 re-opening ad as a cinema;

OK gang Here is the straight scoop on the old York, I grew up around the corner. As A kid in the 50’s it was a small neighborhhod movie house. Buttered popcorn and a soda was a quarter. In the early 60’s it tried becoming a playhouse. I remember seeing young abe Lincoln there with Piper Laurie. Next to it on the corner was Frank’s luncheonette. When the area got bar happy, The theatre and the luncheonette were gutted, and became the famous MAXWELL’S PLUM. building was torn down some years ago and now is another boring high rise.

I have lived on 64th between First & York for over 30 yrs now & fondly remember Maxwells Plum esp. since to go anywhere other than the E River, I have to constantly pass this corner. It was a 2 story Blockbuster at one time. I always thought that the space occupied by Little Ricky’s today (before that a drug store & before that a small disco/club) may have been part of the theatre? Glad Mr. Laffs was mentioned because the area used to have more comedy clubs other than the areas still lasting ‘Dangerfields’ I barely remember another comedy club nearby called “Who’s On First.” The area still has the Clearview Cinemas on 62nd btwn First & York but has seen it’s Second Ave. theaters closing.

The Clearview has also closed.

The 1960 series “Naked City” is currently seen on MeTv. In “The Succession of Heartbeats” a car being chased by the police shows the York as the they turn from 64th onto First.

In the 60s the York tried its hand as a revival house, among some great double bills I saw there were On Waterfront/A Place in the Sun, One-Eyed Jacks/Bad Day at Black Rock and the Searchers/Lonely are the Brave.