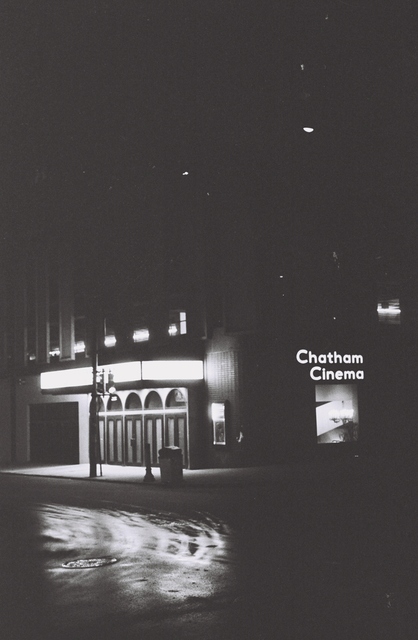 The Chatham Cinema was one of the few new theaters built in downtown Pittsburgh in the 1960’s. It was located in the rear of the Chatham Center complex on 5th Avenue near the Pittsburgh Civic Arena and Duquesne University next to the parking garage in the complex. There were even walkways which led from the parking garage right into the lobby of the theater. After buying your ticket you walked down a ramp to get to the concession stand and the doors to the auditorium.

The Chatham Cinema opened on October 26, 1966 with Michael Caine in “Alfie”. It lasted until the mid-1980’s when like most of the other downtown Pittsburgh movie houses it closed due to first-run product being featured at suburb multiplexes and the city amusement tax. But in its heyday of the late-1960’s and 1970’s many of the big first-run releases played at this theater and some had lengthy runs.

For a while after closing the lobby was used for storage and the glass doors that had opened onto the street were papered over. The marquee was finally removed and the entrance bricked up. Today there is no sign that a movie theater ever occupied the site.

@ WarnerChatham: I just showed Polanski’s TESS to a class on Wednesday morning! And now you’ve reminded me that I saw it first at the Chatham. I, too, would love to see what the space of both it and the old Fiesta look like because neither are being used for anything. That’s a genuine waste. The Mayor keeps saying he’d like to have movies downtown again and hinted that he’d like the Warner to be overhauled (don’t hold your breath – the grandeur of that palace is gone and can never be replaced or duplicated). But the Chatham and the Fiesta are there for the renovation, and would be much, much cheaper to do.

@csepe: I am not sure what is left of the Fiesta. The Art Institute was using it for classrooms for some time. I am not sure if they just covered up the slanted floor, or if they gutted the whole auditorium. The escalator and front lobby were still pretty much the same, but beyond that, it was pretty much modernized. In don’t know if it could easily be converted back to a theatre. The Chatham needs new seats and some TLC, but it probably would have a better chance. Now if somebody rich would just buy the place…..

WarnerChatham, thank you so much for sharing your photos of the Chatham. So many memories came flooding back. They are great shots.

Another memory of mine, driving just about all night from Beckly,WVA and then catching a matinee of THATS ENTERTAINMENT in 1974. I really do wish that the Chatham could be restored and re-opened, there is a built in audience from the Apt tower and hotel.

@rivoli157. You’re welcome! I’m glad you like the pictures. I will be posting more.

I understand some people from Duquesne University were looking at the Chatham recently. It would be an ideal location for them. Of all of the theatres left downtown, it is the only one that hasn’t been gutted (like the Warner, Gateway, or the Fiesta). It still has the basic structure in place, even though it needs a lot of work. I know a group of people have recently re-opened the Hollywood in Dormont. Perhaps the same thing might happen for the Chatham Cinema. I would really like to see that happen.

hey WarnerChatham—just wondering who you are, because I also worked at the Chatham during the 80’s, as it’s manager. I also managed the Shadyside Theater, from 1972 until it closed, and managed the Fiesta also….I’m sure I can add some info on many of the downtown theaters, since I spent most of my early years managing most of these theaters. Just curious to see if you worked for me. I also keep in touch with the few managers that are still alive. You can email me at .

There was a modern elegance to this theatre. Very classy. One of the unique features of it was the entrance from the parking lot, in addition to the main entrance. On my recent trip to Chatham Center, I tried to go to the theatre entrance from the parking lot. There was a wood barricade that blocked access from the parking area. There was a door in the barricade that allowed a view through a crack in the doorframe. You could see inside that they were using the rear entrance way as a junk area. There were paint cans, bags of sand, pieces of wood, etc. Very sad. If the theatre were to be reopened, many people standing at the lower Washington Place gate at Consol Energy Center could not help but see it. It is right there. It could be potential draw of business.

the chandelier that graced the lobby of this theater was imported specifically for this theater from Italy, along with a antique grandfathers clock, this was a very unique and classy venue to view films in the 1970’s. Other antiques included a conversation couch, which two people could actually be face to face with each other, hopefully enjoying a conversation about film. This was in the small alcove just outside the managers office. Could a theater with such a great past really survive today, especially with the lack of good films? The ability to stream movies on a computer/HD television via netflix, or roku, and how about the “fear factor” of being in downtown (actually uptown) Pittsburgh at night. Comments appreciated!

Uploaded a seating chart for the Chatham Cinema….

I just came across this site, and it brought back so many memories. I also was an usher at the Chatham starting in 1968 until about 1970, and then again in 1971. I could tell a million stories of our escapades…and we were demons at times for sure. But first, I have to correct the seating number posted….647…it was 678..and I counted them many times.
I remember you Dan Clemente, and Ken Anderson…along with Dennis Mudry, Ben Cushion, Denny Gaber, Bill Kent, Nick Mamula, Jerry States, Leon Elkins. Jim Jackson and on and on. Adail Bouvy was a very good friend as well. George Pappas, George Gatto and Cathy Gatto, his daughter also worked there. Demon ushers??? We from time to time would have swearing contests while standing at the doors when the lobby was crowded, to see who could swear the loudest. It was hard to keep a straight face and looking innocent after letting one fly, and Leon Elkins would always win. During the movie, we would sit on the benches and throw quarters across the lobby at the sand filled ash trays. The clang of the side would alert Mr. Pappas, and the game would end quickly. Then we tried the candy “Dots” because they were quieter when they struck the metal sides of the ash trays. Another challenge was to pull the posts holding the ropes that separated the lower lobby, and see if you could get all of them to tip, without falling. Of course, someone would go too far, bang the post down, and here comes Mr. Pappas. I have so many stories, but a more serious incident happened when the popcorn machine caught fire just after the movie started. Bullitt I think was the movie, and there were at least 400 people in the theater. Not knowing any better, I grabbed the fire extinguisher and pumped it into the bottom of the popcorn stand, thinking I had put it out. But it was an electrical short, and I didn’t know to kill the breaker in the panel, and the lobby filled with smoke, so thick you couldn’t see 5 feet. There was no smoke in the theater, and the people never knew what had happened until they exited the theater. We also posted ushers inside and didn’t let anyone exit during the movie. Could you imagine if someone had yelled FIRE!…in a crowded theater?? That’s enough for now, and if any of my old usher friends want to contact me, aasrpghmembers at Ya Hoo dot com.

I saw a sneak preview screening of Raiders of the Lost Ark at the Chatham a couple of weeks before its actual opening. It was a packed house. When Indy shot the swordsman, the place literally erupted. it was an amazing experience at a truly classic theater.