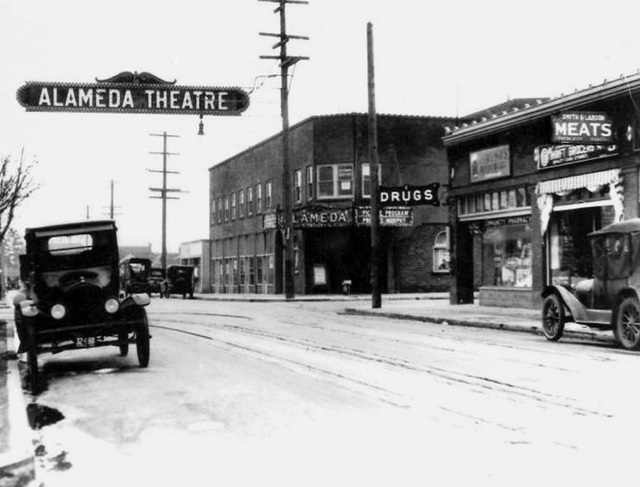 The Alameda Theatre opened in 1927 with 600 seats. The auditorium is designed in an Atmospheric style with a Spanish Colonial courtyard setting. It was closed as a movie theatre in 1978. By 2005, the building was used by the Victory Outreach Church of Portland.

In the Summer of 2010, it was reopened, renamed Alberta Rose Theatre and was used as a live performance theatre, with ocasional screenings of independent movies.

"The Alameda Theatre, located at 3000 NE Alberta Street, opened its doors to the public in 1927. Renamed in 1937 and 1964, it became the 30th Avenue Cinema then Cine 30. In 1969 the theater returned to its original name. After 51 years of service, the theater closed in 1978. The Alameda is one of a handful of motion picture houses that have been converted into churches. The building was home first to the Macedonia Church of God and later to the Victory Outreach Church , its current occupant. The exterior still looks much as it did 74 years ago, with its distinctive Mediterranean clay tile roof and stucco walls. The marquee was removed years ago, but painted-over movie poster boards at the corner entrance summon up the once busy theater."
—The Oregon Historical Societies' "Meet Me at the Movies" exhibit
View link

You can see a nowadays photo here, and an old photo here.

We will be re-opening this theatre in May 2010. It will be named The Alberta Theatre and will feature live music, performances, and film.
Stay tuned!

As of June 24, 2010, this became the Alberta Rose Theatre, a three hundred seat venue for primarily live music: View link. The official website is: http://www.albertarosetheatre.com/

While there was an architect named Walter E. Kelley working in the 1920s, he practiced in New York. His Portland contemporary spelled his surname Kelly. Kelly was best known for his residential buildings, but did design the City Hall in Milwaukie, Oregon, built by the Public Works Administration in 1937-1938.