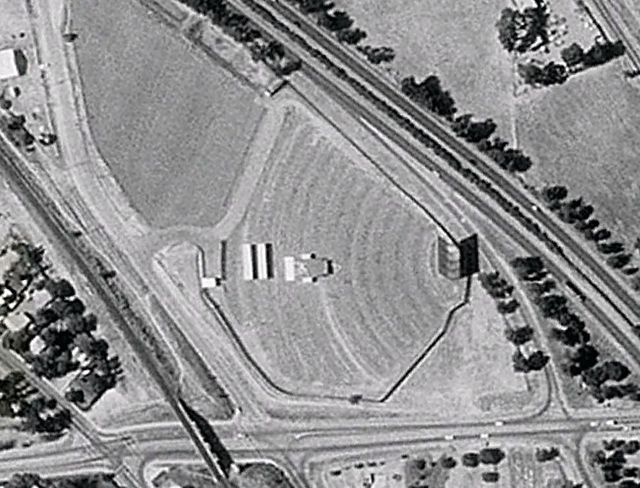 Opened in 1966 as the Sierra Drive-In. In 1978 the name was changed to the Marysville Drive-In. This drive-in had a capacity for 474 cars.

The Marysville Drive-In was closed in 2005.

This theatre should now be listed as “Closed”. The owner Bob Golding died unexpectedly last year while in the midst of fighting to keep his drive-in operational despite pressure from the landowners to sell. His family was unable to continue without his efforts, and the drive in closed. RIP Bob Golding and the Marysville Drive In.

Indeed, Fresh Logic Atlas shows the projection booth and screen, but Google Earth shows only the landform with no structures. A sad look at this change we so frequently discuss. Goodbye to a drive-in.

With Google Earth you can always go back and view historical imagery and go back a few years. Sometime up to 1992 or earlier.

I FELL IN LOVE. If it is so special to you why don’t you write more than what you did above.

I saw a comment on here about selling it in 2005 for development, here it is 2015, I pass by this property daily and its nothing. I see an officer sitting there in the back all time and I see a small fruit stand on the road side daily. but development yet.

That is the ultimate sign of karma. 10 years ago, Bob Golding got shown the door, although he passed away suddenly and there went the last efforts to keep it going until the bitter end. I’m not surprised this end of town has never seen development. When they came in with the wrecking ball a few years back (and this was so they could present a more favorable look of the land) There was no care taken in the inventory left in the snack bar. I’m sure some fans would have paid to have a keepsake of the Marysville drive-in.

Wow, looking at the pictures it seems this was a very well kept drive in. What a shame that it closed, especially if the land is just going to lie unused.

has since been demolished!