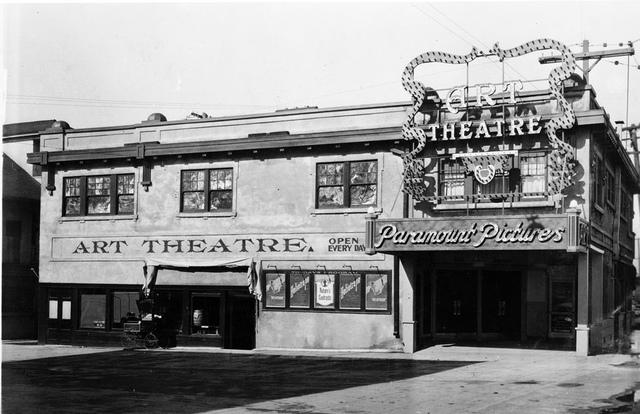 Opened in 1913, this 600 seat theatre was designed by Los Angeles architects Hunt and Burns. Initially having a programme of film and vaudeville, on the fairly large stage which was 20ft deep and a procenium opening of 40ft wide. It was taken over by West Coast Theatres in 1920 and showed mainly action and western movies.

It closed in 1928 and was demolished to make room for the Fox Redondo Theatre which was built on part of the site, opening in February 1929.

This is probably around the time of the opening:
http://tinyurl.com/nwxh7

Does ANYONE have pictures of the Fox Redondo Theater?? I used to go there back in the early 60’s, it had a balcony and even had frescos on the huge walls. I believe it was also used as a bomb shelter, I do know when they tried to demolish it the wrecking ball bounced right off of it. One would have to have gone to this old giant to appreciate just how grand it was. One year it even had a closed circuit broadcast of the Indy 500. It was the most boring experience of my life.

There are plenty of photos on the Fox Redondo page.

Redondo Beach – The new Art Theater will be opened tomorrow night with a benefit performance given by the local order of the Fraternal Brotherhood of Eagles. Special arrangements have been made for the members of the Eagles from Los Angeles and Santa Monica to reach Redondo and it is supposed that two special cars will arrive from each place. Two shows will be given, the first performance beginning at 7 and the second at 9.

Here is the USC photo:
http://tinyurl.com/yet2qr9